In this piece, I’ll be updating one of my favorite strategies to identify starting pitchers to target via trade for fantasy baseball players in 2016.

Michael Pineda | Yankees –  Twenty-seven year-old Michael Pineda is the top player on our list with an above average K-BB% (18.10). He’s posted a 6.14 ERA through 12 starts which significantly lags behind the 3.57 SIERA and 4.29 FIP (3.63 xFIP) his peripherals suggest he should be at. He’s inducing swinging strikes more than he has over the course of his career ( 14.2% SwStr% vs. 12.2 for career) which supports the spike in strikeouts, but we would like to see a few less walks to further improve that K-BB%.

Velocity on each of Pineda’s offerings look good as well. Looking for the trouble spots, we see Pineda has been bit by the batting average on balls in play bug — balls put in play are resulting in hits at a .371 average, compared to his .297 career mark — as well as the HR/FB% monster — 17.4% HR/FB% versus a career 11.1% HR/FB% mark — which will theoretically improve between now and September.

Matt Shoemaker | Angels – Shoemaker struggled mightily to start the season, but it was a trip to the farm that may have bought the Angels’ right-hander a bit more time in the first division. Friends over at FanGraphs and RotoGraphs note the spike in usage of Shoemaker’s splitter along with its effectiveness in all counts have accounted for a good portion of his recent success.

When looking at game logs, Shoemaker surrendered six or more earned runs in three of his first five starts on the season, so his 5.40 ERA is still rebounding from those outings in an effort to get towards the 3.75 and 3.68 marks that FIP and SIERA suggest he should be at. And despite allowing eight earned runs in his most recent four trips to the bump, Shoemaker has posted a 37:0 K:BB over that 30.1 inning span. Green lights galore on the chart, invest where you can.

Collin McHugh | Astros – Like the pair of pitchers noted above, Collin McHugh’s ERA and SIERA suggest he’ll make some improvements in the near future in those marks, just not as dramatic. His strikeout, walk and swinging strike rates are all better than his career marks, all while surrendering fewer hard hit balls (Hard%) compared to his career rates. I hate to use the word “unlucky” these days, so I’ll simply say that McHugh has allowed a higher batting average on balls in play (.348) and more home runs per fly ball (11.6%) compared to his career numbers (.307 BABIP and 10.6% HR/FB%). The velocity on his fastball is down a hair, but as you can see below, the velocity in each of his offerings are rising as the season wears on. Green lights to make a move and acquire McHugh. 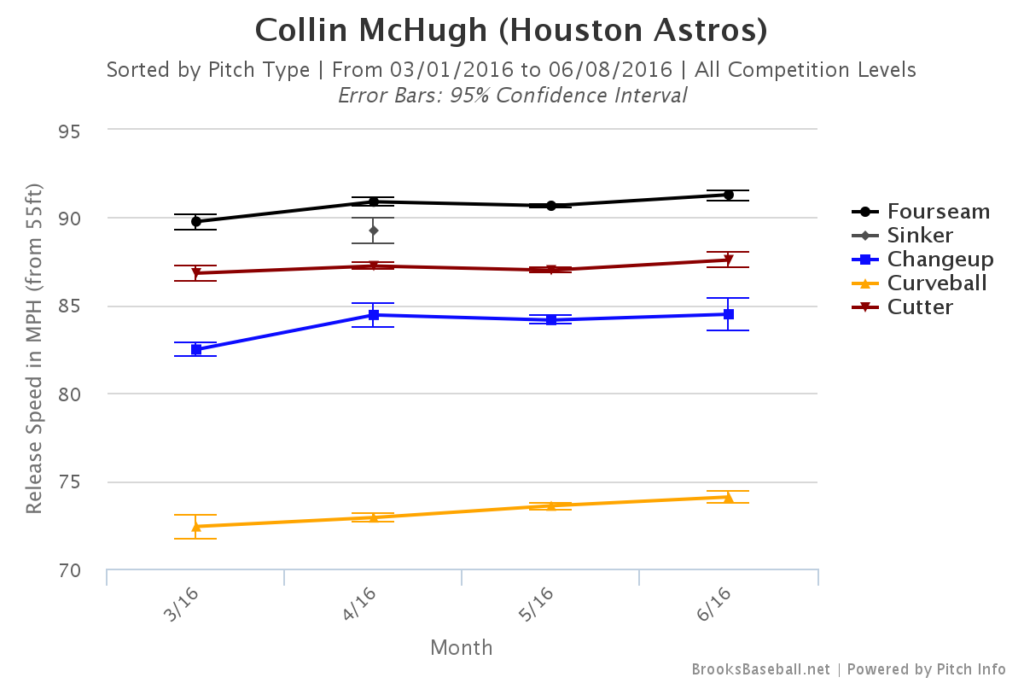 Jimmy Nelson | Brewers – Outside of the Slippin’ Jimmy’s current 3.43 earned run average, the rest of his chart is somewhat concerning. His velocity appears to be within range of his career numbers, but his strikeout minus walk rate is down for the third consecutive season. He’s inducing swinging strikes a career low 7.5% of the time. Looks like he isn’t using the slider as much as he once was — the pitch he induced the most swings-and-misses with — as you can see below.

The five wins and fine earned run average at this time could allow you to pull a decent haul via trade if other owners aren’t looking deep enough. I’d deal him straight up for any of the three listed above if you could pull that off. 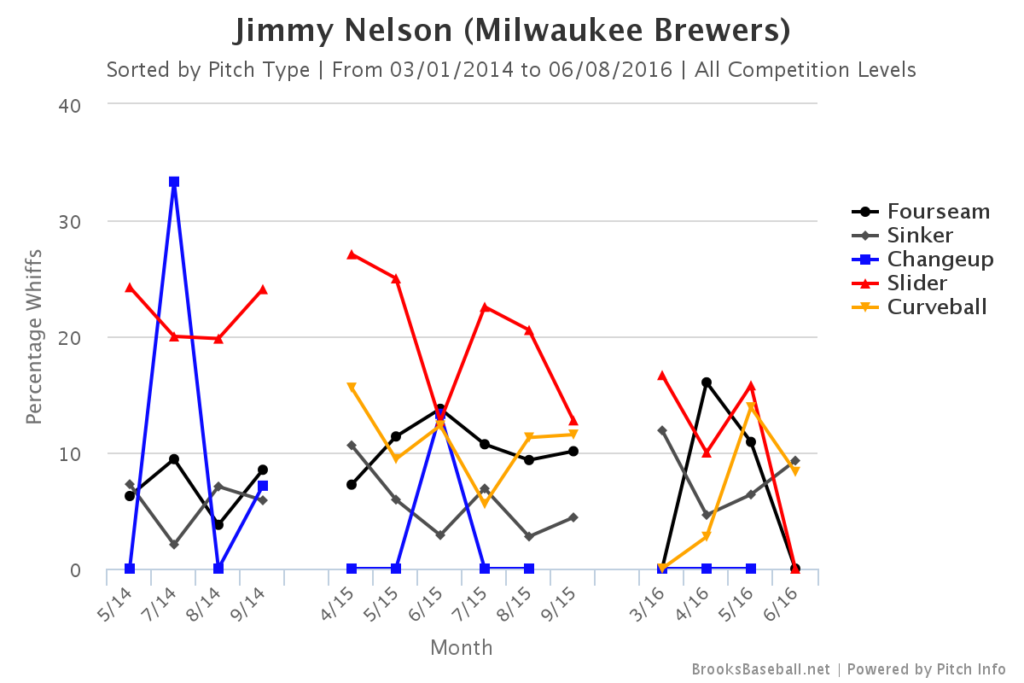 Taijuan Walker | Mariners – Scribes around the baseball industry have been talking about Walker’s potential for what feels like years now. All the pedigree in the world, at the top of all the prospects lists known to man and finally earned a full cup of coffee in ‘15 to showcase all of these talents we’ve been reading/hearing about. An 11-8 record with a 16.6% K-BB% is a decent start, but his 4.56 ERA (4.01 FIP) sang a bit of a different tune.

With nothing but optimism for continued growth entering his age-23 season, Walker started with four consecutive quality starts and a 25:4 K:BB rate. But since the start of May, Walker is 0-6 (7 GS) with one quality start and a 27:12 K:BB. If you’re not feeling great about the 3.94 ERA owned by Walker through 11 starts you may feel even more uneasy about the 4.91 mark FIP suggests he should have. Yous should be able to get more for Walker than Nelson on name value alone, but float his name to your league-mates and see what he can fetch before making some outlandish demands .

J.A. Happ | Blue Jays & Marco Estrada | Blue Jays – Marco Estrada is one of those pitchers that writers assume will fall off a cliff at some point, but he’s proven them (us?) wrong up until now to an extent — or maybe it’s just taking a bit longer to correct. I’m still selling if I can because his .191 batting average on balls in play is not sustainable, therefore he’s not a bettable guy. FIP feels his 2.41 ERA will likely head north towards the 3.82 mark, but SIERA is even more bearish by suggesting he should own a 4.49 mark. He’s striking out batters at a decent clip, but he’s surrendering too many free passes (9.9% BB) resulting in a not-so-pretty 11.6% K-BB%. Swinging strikes and velocity are both down versus career marks, too. Visual to follow. Lots of red for his teammate J.A. Happ as well. I’ll defer to the chart for you to examine. 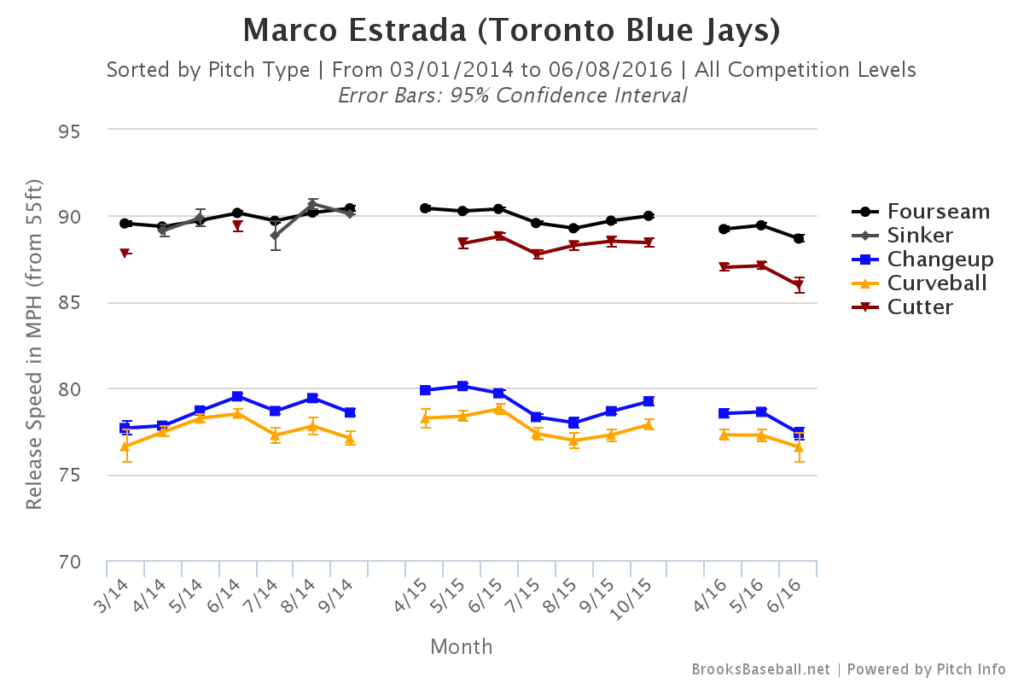 Here’s the chart for your viewing pleasure (or you can download it directly here):