Below you’ll find rankings for the nine-game slate of CFB contests on DK Saturday along with some commentary. You’ll also find a matchup chart for the slate that includes information from Vegas and information on each team’s opponent in terms of their defensive strength. The defensive numbers are rankings from Football Outsiders’ S&P+ ratings. All the info is color coded as follows from most favorable to the offense to least favorable: purple-blue-green-yellow-orange-red-burgundy.

As always, keep in mind that price has a big impact on a player’s ranking.

Editor’s Note: If you haven’t deposited at DraftKings yet, we’ll help you get started & give you access to our #FrontOffice for free if you use this link. 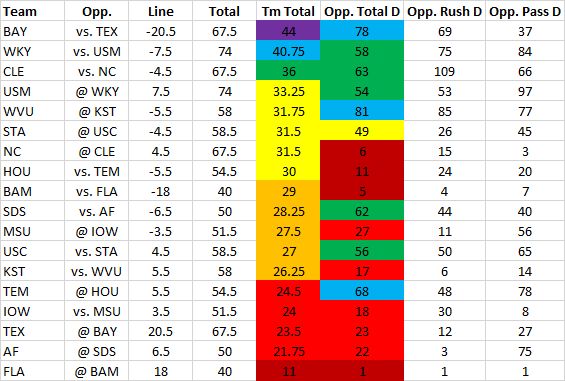 After a bit of a slow start to the season, Deshaun Watson has been on fire in the second half of the year. In his last seven games his lowest fantasy output in a game was 25.52 points, and he’s had 37 fantasy points or more in five of seven games. In that stretch he’s averaging 38.8 fantasy points per game. Given that he only needs to get to about 30 fantasy points to be worth his salary, there’s plenty of potential for gravy with Watson this week. On top of his recent performance, he has a nice matchup in a week where there aren’t as many of those as we normally see. North Carolina rates 63rd in total defense and 109th against the run. No other team on Saturday’s slate rates lower than 85th against the run. Given the damage Watson can do with his legs (he’s topped 100 yards rushing in three of his last four), this is a particularly good matchup for him.

Brandon Doughty is the other expensive QB I would consider this week, though I prefer Watson. Unless you’d prefer to roster two safer QBs in cash games, I don’t know that I’d be rostering Doughty this week. His matchup is good against a Southern Miss team that has the second worst rated pass defense of any team in this slate, but he just doesn’t have Watson’s upside. He gets to the 30’s more often than not, but he has only cracked 40 fantasy points once this year.

Instead, I’d go cheap with my QB2. Baylor’s Chris Johnson struggled in his first start last week against TCU, but it was a certifiable downpour in Fort Worth during that one. I live an hour over in Dallas, and it was raining pretty damn hard, but the nastier looking stuff on the radar was out west towards Fort Worth. I’m willing to give Johnson a pass, and it would seem Vegas is as well as the Bears have the highest team total of the slate. They’ll face Texas who rates 78th in total defense, which is the second worst rating of any defense playing in this slate. In that matchup and at his price, which we can thank last week’s weather for, I like Johnson’s upside and value potential.

If you don’t trust Johnson to avoid a bomb or if you just want to save a few hundred bucks, Skyler Howard is also an option to be your QB2. Howard scuffled mid-season, but he has topped 21 fantasy points in each of his last three games with an average of 25.3 fantasy points per game in that stretch. At 18 points or so Howard would be worth his price tag, so his recent performance indicates value potential. His matchup with Kansas State is a good one as they’re the only team in this slate with a total defense rating worse than Texas.

Donnel Pumphrey gave his owners a bit of a scare last week as he missed a portion of the game, but he eventually returned from injury and finished with 154 yards and two scores. He’s working on a six-game stretch where he’s failed to clear 28 fantasy points just once, and his per-game average in that span is 32.4 fantasy points per game. He’ll face Air Force who rates about average defensively compared to the other teams playing on this slate but doesn’t count as a prohibitive matchup. But Pumphrey is damn near matchup proof anyway.

Christian McCaffrey is the other expensive back to consider, but he’s more of a boom-or-bust option. In his last seven games he has three games with 40 fantasy points or more, but he doesn’t get to the 30 mark as consistently as Pumphrey. McCaffrey also has a tougher matchup against USC who is slightly above average in total defense and run defense compared to the other teams in this slate. McCaffrey bombed last week against Notre Dame, so I would imagine he may not be as highly owned as guys like Pumphrey and Derrick Henry, so he might be a decent tournament play.

In the mid-price range, Shock Linwood and Wendell Smallwood strike me as similar plays. Both teams have good matchups, and both backs should have game flow on their side as favorites, particularly Linwood as Baylor is favored by almost three touchdowns. The concern with Linwood is that his knee still isn’t totally healthy and his workload is limited. But he’s doing more in practice than he did last week, so his health feels like a little less of a risk this week. If you need to save a few hundred bucks, you could go with Ito Smith in this price range. He and Jalen Richard have sort of alternated big performances, but Ito has at least 23 fantasy points in each of his last three and put up 45.9 last week.

If you need a really cheap back, Charles Jones is about the cheapest that I can recommend. I hesitate because I don’t like the matchup against West Virginia who rates 17th in total defense and sixth against the run. But Jones is a pretty good bet for 12-18 carries and 60-80 yards with the chance of finding the end zone.

I know Corey Coleman has failed to score in three straight games, and I know he caught just one pass for eight yards last week. But we already covered how the weather affected Baylor last week, and in the week prior he was facing Oklahoma who rates 13th in total defense and fifth against the pass. This week’s matchup is different against Texas who rates 78th in total defense and 69th against the pass. I get the feeling a lot of other people will jump all over Coleman at this price no matter his recent performance, so maybe you fade him in tournaments. But man is he tough to pass up at this price.

Next up we’ve got the options to stack with Doughty. You can definitely stack Doughty with both Taywan Taylor and Nicholas Norris in tournaments if you like. But were you forced to choose just one, I might lean towards Norris. I really want to roster Coleman, and rostering Coleman and Taylor together would probably result in me having to go cheap at either both QB slots or both RB slots, which I don’t want to do. Taylor and Jared Dangerfield lead Western Kentucky receivers in the percentage of team targets that they see (around 21-22 percent), but Norris isn’t too far behind at 16 percent, especially given that he’s much cheaper than Taylor. And Norris has been more productive than Dangerfield recently.

Other stack options include Shelton Gibson with Howard and Jordan Leggett with Watson. Gibson disappeared a bit down the stretch, but he bounced back in a big way last week with 148 yards and a score against Iowa State. He’s a bit boom-or-bust, but he has boomed big several times this year. As for Leggett, the tight end is really just a salary relief punt play. Watson does a lot of his damage with his legs, and Clemson doesn’t really have a consistent, go-to receiver that you can trust. So it might be wise to just punt with Leggett and get some salary relief while getting a little more upside by rostering Watson along with Leggett.

Two other options I like are Robby Anderson and D.J. Thompson. Anderson dominates the targets for Temple, receiving 27.06 percent of Temple’s targets, which is the sixth highest percentage of any receiver in this slate. Temple is facing Houston who rates 68th in total defense and 78th against the pass, so the matchup is good. Thompson and Southern Miss are the underdogs in the game with the highest total of the slate, so they could end up throwing it a lot. They tend to throw it a lot anyway with 38.5 pass attempts per game, which is the 19th highest mark in the country. No Southern Miss receiver really dominates the targets on the team, but Thompson is behind Mike Thomas and Casey Martin in terms of production. But Thompson is $1,600 and $1,300 cheaper than his teammates.

Thanks to cfbstats.com, NCAAsavant.com, Football Outsiders, RotoGrinders and ProFootballFocus for statistics and information used in this post.