Welcome back to the Daily Fix here at The Fantasy Fix. It’s baseball time over at DraftKings. For those who aren’t yet Daily Fantasy baseball players at DraftKings head over there via this link and join. They will double your initial deposit up to $600.

I will again skip the early games and focus on the late slate for the contests starting at 7:05pm eastern.

DraftKings gives you $50,000 to draft eight hitters (one at each position)and two pitchers. DraftKings features the following scoring settings for its daily fantasy baseball games:

Mike Minor | LHP | Braves | $7,500 – A 4.90 ERA is exactly what you are looking for out of your starting pitcher. However, if you look a little closer, you see a pitcher averaging almost 22 points on DraftKings over his last three starts. He seems to be emerging from his season-long slump and he gets a Mets team that is 28th in wOBA against lefties and whose best hitter against lefties (David Wright) is less than 100%.

I struggled to zero in on a second pitcher (and I think that’s the key to today’s game), but finally decided on….

Alternatives: Collin McHugh ($9,200) gets a nice matchup with the faltering Rangers coming to town, but he is the most expensive pitcher on the board and he’s struggled at home (4.07 ERA) so you’ll have to get creative with your hitters if you want to get him in the lineup.

I considered Jeremy Hellickson ($7,200) as he’s been hot lately as he’s striking out more than a batter per inning over his last three starts.

If you want to go completely contrarian, Nick Tepesch ($5,400) and John Danks ($5,000) both face teams that are in the bottom seven in wOBA against, but a move like that is only for GPP plays.

Chris Carter | Astros | $4,500 – There hasn’t been a hotter hitter in August than Mr. Carter. He’s generally a better hitter against left handed pitching, but in his current state he can match up with anyone.

Jose Ramirez (2B/SS) | Indians | $2,900 – Ramirez has been hitting second regularly for the Indians and has been hitting relatively well in that spot. In his last five games, he’s scored no fewer than six points in any one game and he’s got two double digit outputs in there. He is also an option at SS.

Danny Santana (SS/OF) | Twins | $5,100 – Yes, it’s not that creative to take the most expensive option at a position, but Santana has been hitting leadoff and he’s got a .374 wOBA against righties this year. Sometimes you have to pay for quality.

A cheap option at SS or 3B is Zach Walters ($2,900). He’s been on a bit of a power tear lately and could certainly find the seats again versus John Danks. He’s been getting consistent playing time at DH since his acquisition by the Nationals.

Tyler Holt | Indians | $2,300 – Holt could be a nice punt/contrarian play. He’s been in the lineup against a lefty the last two times the Indians have faced one and he even hit in the fifth spot. Again, watch lineups to see if he’s in there.

I struggled to find great stacking options, but I’d put the Braves at the top of the list.  A sneaky stack might be the Twins against the Royals and Jeremy Guthrie as Guthrie has been awful at home this year.

Here’s what my lineup looks like right now. I left a lot of money on the table so I may reconsider some of my cheaper plays and go with safer options. Good luck today! 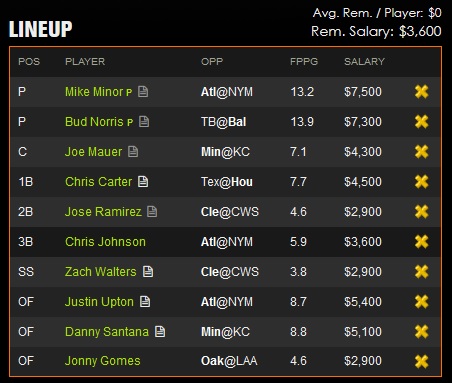