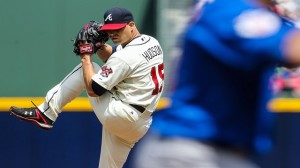 Newly acquired Matt Garza threw a five hit shutout (one unearned run) in his debut for the Texas Rangers. He got the win as his Rangers beat the Yankees 3-1.

David Price bounced back from his iffy start against the Blue Jays last time out by throwing his third complete game in his past four starts! He held the Red Sox to just five hits and one earned run. The run came on a home run from Mike Napoli. Price struck out four and walked none.

Ervin Santana continues to be absolutely incredible for the Kansas City Royals. He pitched eight strong innings, allowing seven hits and just one earned run. He struck out three and walked two. His Royals beat the Orioles 4-3.

Brandon Beachy allowed just two earned runs in six innings during his fourth rehab start for Triple-A Gwinnett. He could be cleared to rejoin the rotation on Monday, according to MLB.com.

Dodgers outfielder Matt Kemp was placed on the disabled list with an ankle injury. Kemp continues to annoy his fantasy owners to no end, as his nightmare of a season continues along.

Nationals outfielder Bryce Harper was held out of the lineup on Wednesday with a sore left knee. This is the same knee Harper injured earlier this season. Like Kemp, Harper continues to be an annoyance to fantasy owners as well, as he’s really struggled when healthy, and typically hasn’t been healthy.

New York Yankees third baseman Alex Rodriguez will be re-evaluated on Thursday by the club. To be honest, I’m sick of Alex Rodriguez, and I only add this to the notes because there are some owners out there that are desperate enough to try to gamble on A-Roid. He should just be left on waiver wires though.

Zack Cozart of the Reds, was held out of the lineup Wednesday with hip soreness.

Scott Kazmir dazzled Wednesday against the Seattle Mariners. He allowed just one unearned run, striking out seven, walking just two, and giving up just one hit in eight innings. Kazmir has allowed zero earned runs now in back to back starts, and it’s his second one hit performance of the season. He allowed just one hit in seven innings against the Orioles in Baltimore on June 26th. He needs to be owned in all formats.

Carlos Gomez of the Brewers, went 4-4 Wednesday night with two RBI and a stolen base. He had previously been struggling, going 3-31 in his past nine games.

Nate Schierholtz of the Cubs went 3-6 with a home run and five RBI against the Diamondbacks in their 12 inning marathon that the Cubs ultimately won 7-6. Schierholtz has now homered in each of his past two games.

Jeremy Hefner was brutalized once again, this time against the Braves. With 13 earned runs in his past 6.1 innings, Hefner needs to be dropped in every single format. The shine is off.

Joe Saunders was thrashed back down to earth by the Cleveland Indians on Wednesday. He gave up five earned runs and nine hits in just under five innings pitched. He is no longer on the streamer list, as his next start comes against the Red Sox in Fenway.