Welcome back to the Week 14 edition of fantasy baseball 3×3, where we’re giving Nolan Arenado his due, awaiting Josh Willingham’s next move, and showing Todd Frazier the door. As always, this isn’t meant to be a comprehensive survey of the waiver wire, but rather an interesting spin around the player pool.

Michael Pineda is on his way back. His rehab has been lengthy, but it’s also been generally uninterrupted and on schedule. The Yankees have exercised a very un-Yankee-like degree of patience with their young right-hander.

He struggled a bit in his most recent rehab start,  walking four and surrendering two home runs. He tossed six scoreless innings, fanning four and walking two in his prior rehab outing. Rehab outings tend to have these sorts of ups and downs, but there was one very positive constant throughout: Pineda’s fastball sat around 92 mph, occasionally touching 95 mph. It’ll take more time for the command to come around, but being able to maintain fastball velocity is a great first step.

Pineda’s fly ball tendencies might pose a problem in Yankee Stadium’s cozy confines, but I can’t ignore a pitcher who finished his only full MLB season sixth in the league in strikeout rate (24.9%). There’s no other pitcher out there with the same combination of wide availability and championship-changing upside. He’s well worth your DL slot.

It appears the novelty has worn off. The next round of call-ups are in the majors, and fantasy owners have shoved Nolan Arenado aside in favor of the Wil Myerses, Gerrit Coles, and the like. His ownership in Yahoo! leagues has dropped to just 24%, ranking him 31st among 3B-eligible hitters. He’s like that Slinky that you just had to have, but quickly set aside when you figured out the steps on your mom’s staircase were too wide to do that cool thing from the commercial.

This particular misfit toy hit three home runs in his first seven games, but trotted around the bases only twice in the 44 games that followed. It seemed to be a sign that even in Colorado, Arenado didn’t have enough power to be an ownable option at third base. While it’s true that he’s hit only seven home runs, that total is more a reflection on his limited at bats than it is an indictment of a powerless hitter. His .183 ISO ranks ninth among third basemen, nipping at the heels of Adrian Beltre and pacing significantly ahead of Manny Machado, Pablo Sandoval, and David Freese, all of whom are owned in at least three times as many leagues as Arenado.

His minor league track record indicated he’d hit for average, and he’s backing it up in the majors; just check out his spray chart: 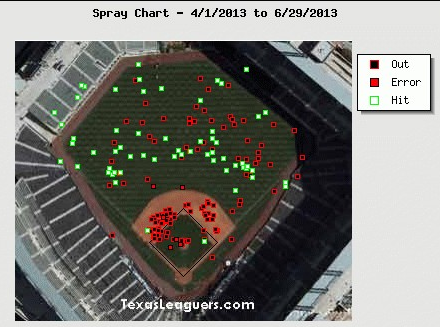 Yikes. Give Arenado a couple thousand more at bats, and I bet he could color in the whole field. With emerging power and a stroke that will clearly produce an excellent batting average, he’s a top ten third baseman the rest of the way.

Beginning with his May 30 start against the Yankees, Dillon Gee shifted his release point. 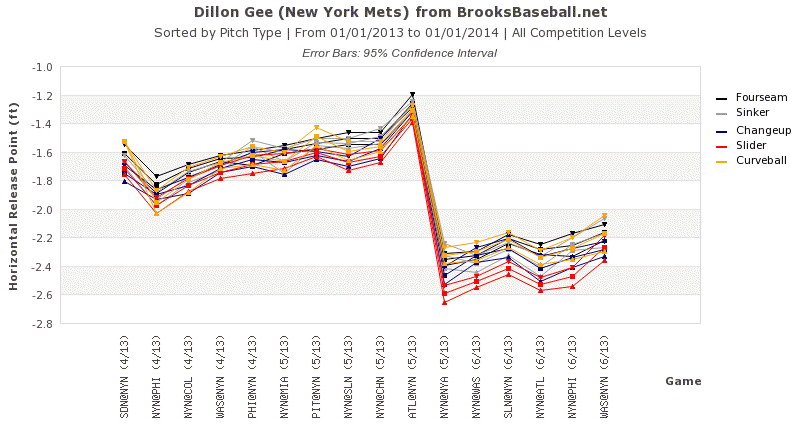 It’s a significant change from where he’s been his entire career and one that’s yielded excellent results. In that start and the five outings since, Gee has allowed more than two runs just once and struck out 40 against just seven walks. He has struggled a bit with the home run ball, but I’ll chalk that up to a particularly flight-friendly night in Philadelphia’s homer-happy ballpark.

Even before his change in release point, his velocity had been steadily increasing throughout the year, making his secondary pitches more and more effective. The whiff rates on his slider and changeup peaked in June; both reached near career-best levels.

Gee is owned in only 18% of Yahoo! leagues; he’s a great pickup in just about any format.

Unless you happen to be in a league with Brett Talley; he’s owned in 100% of those.

After beginning the season with an incredible power surge (6 home runs and a .240 ISO in April), Todd Frazier has lost his touch. More specifically, he’s lost his ability to pull the ball with power.

Check out Frazier’s spray chart from the first month of the season: 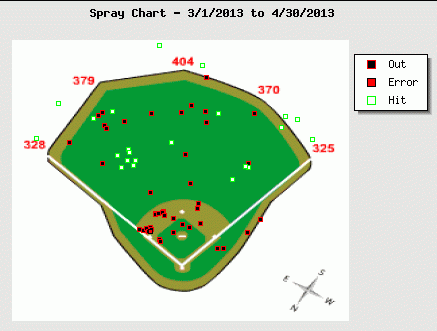 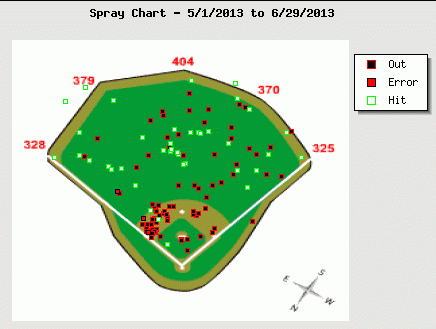 The difference is staggering. His power to left-center has cooled, giving way to grounders to the left side and pop-ups to shallow right.

Pitchers have always tried to get Frazier out down-and-away, but over the last two months, that tendency has become even more pronounced. Frazier has maintained excellent plate discipline, but he’s gotten himself out of too many of those pitches, mostly because he’s struggled to take advantage of mistakes down-and-in.

Look at his ISO on pitches down in the zone from the start of 2012 through April of this year (click to enlarge): 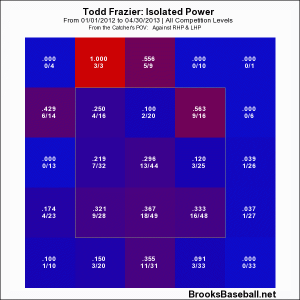 The term “happy zone” comes to mind. Now check out those same spots for the last two months: 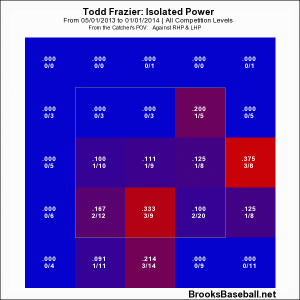 He’s just not the same hitter. Until I see measurable signs of a turnaround, I’m kicking Frazier to the curb.

I could write a very long post about the things that Erick Aybar doesn’t do.

His BABIP leapt from .263 in May from to .326 in June, but that doesn’t change the kind of player he is. We knew before the season that Aybar could post a strong batting average, but empty batting average only has so much value.

Without walks to boost his OBP, he’s not scoring many runs. Without any power to speak of (his ISO is .096), he’s not driving in many runs either. Without elite speed (he’s been successful on only four of his seven SB attempts), he’ll provide only minimal stolen base production.

Aybar’s fantasy value isn’t rooted in an abundance of positives, it’s generated primarily by the absence of negatives. That does have value, but not the sort of value that should place Aybar among the most added hitters in ESPN leagues this month. Aybar is just fine in a middle infield slot in an AL-only league, but he’s not the the type of player that deserves any sort of FAAB investment in mixed formats.

Paul Maholm isn’t a bad pitcher. He’s perfectly useful in fantasy leagues, but he’s useful in a replacement level, “yeah, I’ll start him against the Astros“ kind of way. Much like Aybar, Maholm’s value is more in what he doesn’t do than it is in what he does. A hot start sent his ownership percentage skyrocketing, but since then, he’s turned back into what he’s always been: a useful innings eater, but not a pitcher who’ll miss enough bats to be a strong fantasy contributor.

Maholm’s FIP has been steadily on the rise since his brilliant start, jumping from 3.02 in April to 4.18 in May and 4.67 in June. That increase is likely due to his inability to miss bats consistently; Maholm has struck out more than four batters just once in his last nine starts, a stretch in which he’s surrendered four runs or more on three separate occasions, even while facing some of the weakest offenses in baseball.

Combine that with the chance that a returning Brandon Beachy might bump Maholm from the rotation altogether (Julio Teheran has used his last few starts to make an irrefutable argument to keep his slot), and he suddenly doesn’t seem like a must-own in shallower leagues.

There aren’t many power hitting outfielders more dependable than Josh Willingham. Since the beginning of the 2011 season, only nine outfielders have a better ISO than Willingham’s .233 and only seven can claim more than his 74 home runs.

Willingham is limited, however. He hits a ton of fly balls; his batting average will never be much better than mediocre. But he doesn’t just hit homers through sheer volume. Willingham shows remarkably consistent power, with average fly ball distances better than 285 feet in each of the last three seasons. Just because I’m in a spray-charty mood… 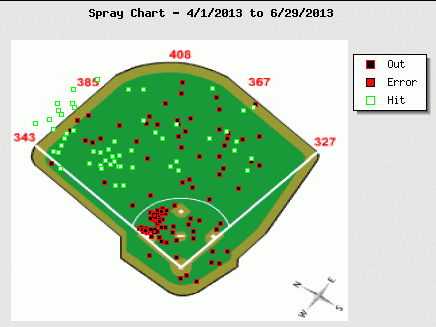 With that many near misses to the pull field, his current .171 ISO doesn’t worry me in the least.

Willingham is a solid pickup now, but he’ll probably be an even better one in a couple of weeks. Perhaps no hitter in baseball is more likely to be moved before the trade deadline. The Twins aren’t going anywhere anytime soon and Willingham certainly isn’t a foundational player. With Oswaldo Arcia and Aaron Hicks already up with the big club, the outfield is getting awfully crowded with players who are part of the future.

When he does get moved, it will almost definitely be to a more favorable situation. Stay patient with Willingham; he’ll wind up with 25 homers by the time the season ends.

For the first two months of the season, his BABIP was unfavorable. He didn’t get on base, and he didn’t steal many bases.

Revere won’t be as great in subsequent months, but he’ll likely hit his way into enough opportunities to double his stolen base total over the rest of the season. His position in the lineup has varied quite a bit throughout the season, but he’s found himself in the leadoff slot quite frequently over the last few weeks. If that continues, Revere will add run scoring to his previously one-dimensional production. He remains a non-factor in HR and RBI, but in deeper leagues, that kind of speed can easily win a few roto points. Unless you have an abundance of speed on your roster, don’t try to sell high.

In the last calendar year, Homer Bailey is Top-10 in FIP and Ks, Top-30 in WHIP among MLB starters. He’s available in 17% of Y! leagues.

I posted that on June 18, about 15 days ago. Over those last 15 days, Homer Bailey has been the 100th-best starting pitcher on the ESPN Player Rater, lagging behind Wily Peralta, Wade Miley, and something called Kevin Ziegrist (I think it’s an old, old wooden ship, but I’m really not sure). As penance for my jinxing, I’m putting Bailey in “3 To Keep” this week.

There’s not much to be gained from judging a 15-day sample for an established player, the excellent results that Bailey will more than likely post over the next 15 days should prove that out.

If you were considering a trade, stop.

Follow me on Twitter @gerardowrites and thanks as always to FanGraphs, Brooks Baseball, and Baseball Heat Maps for the data.