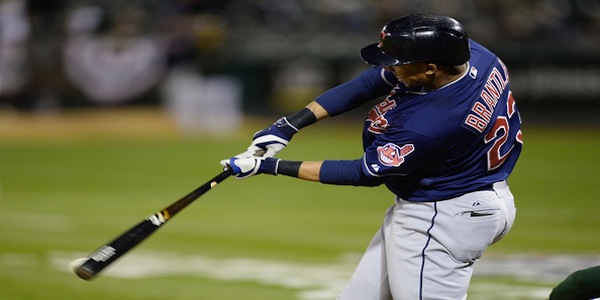 It’s funny what sparks an article sometimes. In this case, a quick Twitter discussion with a colleague, Alan Harrison, about Michael Brantley is the motivating factor for this piece. Alan was pointing out CBS trades involving Brantley, and he wrote about Brantley’s trade value (Front Office piece). Coincidentally, my quick back-and-forth with Alan about Brantley on Wednesday wasn’t the first time the Indians outfielder filled my time line in the last ten days or so. Fellow fantasy baseball experts Michael Salfino and Scott Pianowski debated the value of Brantley in a rather heated discussion that Eno Sarris and Chris Liss also jumped into briefly. Now seems like as good of time as any for me to weigh in on the value of a player who is enjoying a breakout but is a polarizing figure in terms of value for the remainder of the year.

That brings us to the biggest point of debate with Brantley. The 27-year old outfielder’s .200 ISO is well above his career mark of .113, and Brantley’s single season high is .118 back in 2011. The nine homers he has hit this year are one short of his single season high of ten set just last season. He’s in his late 20s, so a jump in power isn’t totally shocking, but this is a huge spike. The left fielder isn’t hitting more flyballs, his batted ball distribution is almost identical to his career rates save for one huge outlier, home run-per-flyball rate. Brantley has deposited 17.3 percent of his flyballs this year into the seats, and his previous high was 6.8 percent last year. Things are starting to look real flukey, but I don’t want to be totally dismissive just yet.

I decided to look at more batted ball data for Brantley, and the data isn’t supportive of his new found taters. Baseball Heat Maps has a nifty leaderboard for flyball and home run batted ball distance. His average distance of 285.42 feet ranks 83rd, sandwiched between Yasmani Grandal and Ryan Hanigan, not exactly a who’s who of home run hitters. His average distance is up roughly nine feet from his 2013 mark of 276.45 feet, so an increase in homers is reasonable, but not at the rate he’s hitting them currently.

For the sake of digging a little deeper, I wanted to look at just his homers, and not the rest of his flyballs. My thinking being that perhaps he’s really getting a hold of balls when he’s leaving the yard, or maybe he’s hitting them to different parts of the park than he has in previous years. Home Run Tracker shows that is not the case. Brantley’s average true distance is down more than 16 feet this year from last, and the bulk of his homers in each season are pull side with only a few stragglers being hit to dead center field. Owners of Brantley should be thrilled if he’s able to match his season total of nine homers over the course of the rest of the season as he’s more likely to fall short of 20 homers this season than flirt with the roughly 25 homers he’s on pace for.

It’s not all bad news for Brantley, though. As I’ve stated, the average isn’t all that crazy, and even when more of his flyballs stay in the yard, he should still hit north of .290. He won’t be a hollow average either. Terry Francona is slotting him third in the Indians order, and that’s a boon for his run production stats. Finally, his stolen base skills are very real. Brantley is a perfect 8-for-8 in stolen base chances. He’s always had above average speed, and he turned that into efficient base stealing last year when he stole a career high 17 bases in 21 chances. He’s kicked the efficiency and stolen base rate up a notch this year, and I believe he’ll surpass 20 steals by season’s end.

Owners of Brantley should feel no sense of urgency to cash out on him. He’s a jack of all trades outfielder that will help in all five categories. However, if another owner in your league believes Brantley is a 25-25 guy, make him pay for that production and recognize you’re coming out ahead.