At 39 years of age, the end is near for Hiroki Kuroda’s career. It has been quite a good one, but that isn’t something his fantasy owners want to hear right now. Five starts into the 2014 season, Kuroda sits with a 5.28 ERA and a 1.38 WHIP in 29 innings pitched. The right-hander was drafted in all types of leagues, but owners in the most shallow may have already cut bait. And at this point, the thought must be crossing the minds of AL-only owners. But maybe this is something we should have expected.

We all knew about Kuroda’s poor second half last season. His first 118.2 innings consisted of a 2.65 ERA and a 1.05 WHIP. The next 82.2 innings didn’t go as well for Kuroda. He posted a 4.25 ERA with a 1.32 WHIP. But many believed this was due to left on-base percentage luck (82.6% to 68.5%), to go along with that mean BABIP troll (.252 to .324). The strikeout percentage and walk percentage remained relatively the same. The Yankees felt the poor second half was because of fatigue. It seems like some luck may have played a factor too. So, maybe we shouldn’t have expected such a poor start after all?

Kuroda’s strikeout percentage has been steady throughout his career. He never dipped below 17.2% and never exceeded 19.6%. Now, he is at 14.4%, a professional low. The BB% is more than fine at 4.8, which would actually be a career-best. Unfortunately, that comes along with a career worst HR/9 of 1.24. The batted ball profile helps tell the story.

The line drives are down, and that would be the only promising thing you could take from this data. Kuroda’s fly ball percentage is a career high, which is leading to a steady dose of home runs. His IFFB% is the lowest since his rookie season. It may not seem like much, but Kuroda is getting less automatic outs because of it. Add that with the low K%, and bad things can happen. There is simply too much contact, and the HR/FB helps indicate it isn’t of the soft variety. In fact, his sinker is getting hammered. And his split, which has been a weapon for Kuroda in the past, isn’t fairing too well either.

To get a better idea of why this matters, let’s take a look at Kuroda’s overall pitch usage:

Kuroda has gone with even more sinkers, but they aren’t doing him any favors. And he has really cut down on the slider usage, almost by half. Why is that? The pitch has been a good one for him. Could it have been a matchup issue? Yet, Kuroda is 39. He has thrown a lot of pitches and a lot of innings. Could he be hurting when he throws the slider?

Here is Kuroda’s game log. His last start is noteworthy.

A game that saw Kuroda get beat up badly by a good Angels offense is the same game that saw him go back heavily to the slider since his season debut. Everything he threw that day got hit hard, but his slider did better than his sinker and split. He could have used more whiffs with the pitch, but then again, he could have used a lot of things that day. Sandwiched in-between are three games where Kuroda barely used the slider. Could it have been because of batter handedness?

It looks like that may have been the game plan. But perhaps Kuroda needs to go back to using the slide piece as often as he did in 2012 and 2013.

Left-handed hitters are currently slugging .500 against Kuroda, as opposed to the .419 career SLG percentage they have hit against him. If teams are going to stack lefties, he may need to re-invent his pitch mix and usage a bit. Or perhaps just go back to what has worked in the past. More sliders. Of course, righties are slugging 100 points higher versus him too. According to the .ISO numbers, Kuroda’s sinker and split have been the pitches hit the hardest, which are two of his three main offerings to right-handed batters. Again, the solution may be more sliders. Maybe it will help him get more strikeouts as well…

…Or maybe not. We see a small dip in whiffs from the slider, which now makes it below average compared to the rest of the league. The split has seen a downward trend in whiffs, but Kuroda is throwing that pitch more than he has in his entire career. The curve and fourseam aren’t thrown enough to really tell us anything of significance. We are working with small sample sizes as it is.

On the bright side, it appears Kuroda isn’t missing his spots that often. 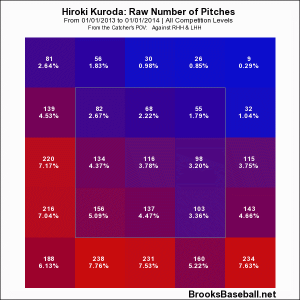 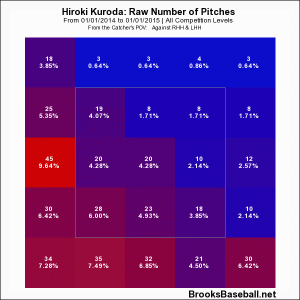 On another positive note, Kuroda’s velocity has remained about the same in comparison to his past few seasons, and although his release point is slightly lower, it doesn’t appear enough to warrant a true concern.

When you invested in Hiroki Kuroda, you were banking on a low ERA and WHIP, and perhaps quality starts/wins. It’s why you drafted him. You weren’t expecting on a lot of K’s, but the drastically low K% is now tied to his overall performance, not just your fantasy standings. He is clearly struggling, but that doesn’t mean the end is here. At least not yet. Owners, specifically in deeper leagues, should give Kuroda a few more starts. Let’s see if he adjusts or returns to his high slider usage. If he does, there’s a chance he could turn this around.