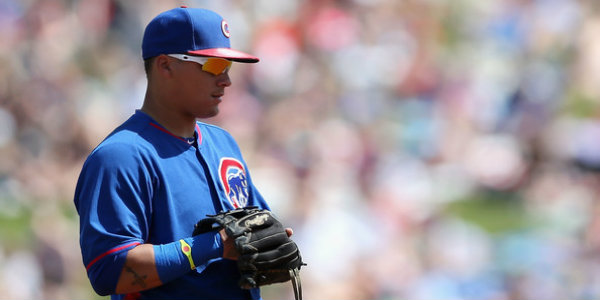 Gregory Polanco graduated, and promptly had a perfect 5 for 5 night, while hitting a game winning home run. He’s very good.

For every Kris Bryant [still crushing] and Polanco, though, there are a ton of struggling prospects. Javier Baez, Maikel Franco, and Matt Davidson have been rendered almost useless all season in Triple-A. Baez, who has possibly the highest fantasy ceiling of anyone, has done nothing to answer questions regarding his swing-and-miss/pitch recognition issues. His strikeout rate is still sky high. Perhaps it’s good for prospects to struggle a little, so they learn to make adjustments. So far, Baez has been slow to make the necessary adjustments.

We’re not all doom and gloom, though. Mookie Betts and Joc Pederson could be fantasy relevant very soon. Pederson still likely needs a trade, but Betts only needs a call up. Considering how awful Jackie Bradley has been at the plate, the Red Sox calling up Betts within a month or two doesn’t seem out of the realm of possibility. In fact, it seems almost likely, if he continues hitting, that he’ll be in Boston sometime in August.

And speaking of fantastic performances, Joey Gallo was promoted to Double-A and immediately continued his assault on pitchers. Gallo, like Baez, swings and misses a lot, but his power is enormous. He’s also made a ton of adjustments to his swing, which seems like it’s going to help him a lot in the long run.

Andrew Heaney is now gone. It will be interesting to see how his strikeout rate holds up in the major leagues, because he’s such a polished pitcher that it is hard to know if he was getting by more on his polish than his stuff. Major league hitters should give us a better measuring stick pretty quickly.

It’s more of the same in this section, really. Syndergaard has returned from his injury scare. Archie Bradley is still on the mend. Eddie Butler graduated, but then succumbed to injury. And if Javiver Baez has had a rough season, what do we call Mark Appel’s? He’s been downright dreadful. Questions about his makeup [intensity on the mound] among other things have run amok. Nothing positive surrounds Appel at the moment, except for: “He can’t be this bad, can he?”

Despite command issues, Aaron Sanchez was promoted to Triple-A. It’s hard to see him having much success in the big leagues now or down the stretch – if the Blue Jays need help – considering how proflific his control issues are.

Finally, two Twins’ hurlers could be on the verge of being called up. Trevor May and Alex Meyer are knocking at the door. A door that will seemingly open sooner rather than later. Both could be fantasy relevant right out of the gate, considering their ability to strike out opposing batters.