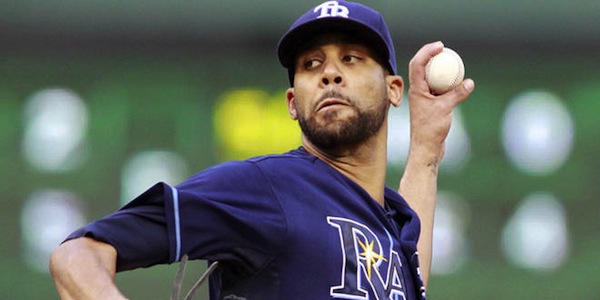 Often times, when making statistical observations, there’s no gray. We can become too ‘black and white’.  Certain outcomes are assumed based on past performance or current trends, and more times than not, these assumptions are true. One assumption that I want to discuss today is the demise of Rays 2012 Cy Young award winner, David Price.

The popular narrative surrounding Price goes like this: due to his year over year loss in velocity (he’s down 2+ MPH on his fastball since 2012) his time as a top-20 fantasy starter has passed, and the days of competing for the Cy Young are in his rear view mirror. Typically, the decrease in velocity will lead to higher contact rates and thus fewer missed bats and that’s exactly what happened to Price in 2013.  The drop in velocity started early in the season, and Price didn’t make noticeable adjustments until the second half. In fact, his contact% and SwStr% numbers were the worst of his career. His command improved (3.7 BB% down from a career rate of 7.2), but he was getting hit as hard as ever, including a spike in LD%.  There’s not much here to be encouraged with other than the walk rate, so most analysts had the arrow pointing down on Price heading into this season.

Player progression and regression are rarely linear; the narrative surrounding Price misconstrued the relationship between peripheral numbers and on-the-field performance. We miss the human element when we do that. This Vanderbilt alum is bright, and he came into 2014 with a different approach.  He knew that if his pitch usage didn’t change than the trends would continue, so Price is relying less and less on the pitch he’s been so dependent on throughout his career, his four seam fastball.  Over the course of his career, David Price has thrown his fastball 39% of the time to left-handed batters and 29% to right-handed batters. Those numbers are down to just 9% and 13% respectively, this season.  He’s now using all 5 of his pitches in a more balanced mix to keep hitters off guard.  He’s pounding the zone with first pitch strikes at an all time high, and lefties in particular are seeing an increase in cutters and sinkers, which are resulting in more swings and misses.  In fact, Price is having his best SwStr% season of his career at 11%, up over 3% compared to last season, with each of his offerings seeing an uptick in this category.   The results are Price’s best K% of his career, 27.4%.

The silver lining in Price’s 2013 season was the walk rate, and it’s only gotten better.  He entered this season with a career rate of 7%, which is about middle of the pack for elite strikeout pitchers.  His K% is the best of his career, so obviously his walks have spiked back up, right?  Ah, yeah, about that…  Price’s 2.5 % walk rate is 2nd in all of baseball this season.  His K-BB/IP ratio is 1.03.  For context, league average is 0.56.  This is elite stuff, simple as that.

He has given up a fair share of home runs to start the year, 8 in just 48 2/3 innings, and the 15.7% HR/FB ratio is nearly double his 2013 total of 8.6%.  He’s also been a tad unlucky with his strand rate, again showing that he’s pitching better than his 4.44 ERA, and I believe that the improvements that we’ve seen this year will help those ratios regulate over the course of this season. With that said, I think he’s an example of the old cliché at its best: this is a pitcher, and not a thrower.  David Price is getting better, folks.  If he continues to vary his approach, he’ll continue to be one of the top pitchers in the game.

Follow Ryan on Twitter, @RyNoonan.  You can also hear Ryan once a week on ‘Caught Looking- Fantasy Baseball Podcast’ for TheFantasyReport.net

2014 Fantasy Baseball: The Daily Double Switch for May 5th