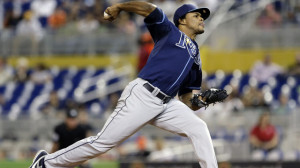 With so much attention focused on the “masses” in fantasy baseball who play in shallow 10 and 12 team mixed leagues, owners in deep leagues (18 and 20 team mixed) and the “Only” leagues are usually scrounging for information. This week we are focusing our efforts on AL-Only league owners (next week will be NL-Only). Let’s take a look at playing time that could become available, guys to trade for if they are owned, and just some general tips for these deep leagues.

Andy Dirks – Outfield – Detroit Tigers: Dirks is an intriguing target this week, and really as soon as possible. Matt Tuiasosopo was scratched from Thursday’s game with a mild intercostal strain, which is medical lingo for the abdominal/oblique area. Given the fact that Tuiasosopo is pretty much a platoon player with Dirks and a little bit of Don Kelly sprinkled in, Dirks stands to gain more playing time should Tuiasosopo land on the disabled list for any length of time. This development would also mean great things for Avisail Garcia, but with Austin Jackson back, it’s possible the Tigers will use Dirks more often since his natural position is left field.

In truth, Dirks has struggled mightily this year, much more than I expected when I ranked him in my Top-75 Outfielders to begin the season. It’s easy to point to Dirks’ BABIP which sits at .269 (was .365 last year) and stop there. However, in the interest of doing actual analysis, it’s important to point out that Dirks has been swinging at more pitches in the zone this year (64.8% in 2012 and 68.8% so far in 2013). The results have been worse though as Dirks’ “Zone Contact Percentage” has gone down from 90.9% to 87.8%. In other words, he’s swinging at more pitches in the zone and making even less contact, which is extremely concerning. The light at the end of the tunnel could be the fact that Dirks has a low batting average on balls in play on fly balls and grounders, meaning that he’s making weak contact, so all of this could be a timing issue (which is more fixable than perhaps an injury or skill decline). American League Only owners could catch a league mate off guard with an inquiry about Dirks’ availability this week, especially given how sub-par he’s been. If he can turn things around, Dirks offers a skillset of 15/15 with a .280 batting average (in a full season) so extrapolate that and apply as necessary for the amount of games he plays. In fact, Baseball Prospectus’s PECOTA system, projects Dirks for 266 Plate Appearances, 30 Runs, 30 RBI, 7 HR, 7 SB, and a .270 batting average for the rest of the season.

Drew Smyly- Relief Pitcher- Starting Pitcher- Detroit Tigers: As an owner of Drew Smyly in my Fantasy Sports Writers Association League now for quite a while in hopes that he would usurp Rick Porcello, I can’t help but be a bit excited for Jose Alvarez’s less than stellar start, as he labored through five innings walking two and only striking out three, albeit with just two earned runs allowed.

Alvarez has enjoyed a real breakout season in 2013. His Triple-A numbers are absolutely incredible, having recorded a 26% strikeout rate and a 5% walk rate in 81 innings this season. This has come out of nowhere to some degree, as Alvarez struggled mightily in 2012 and 2011

While the numbers for Alvarez in 2013 are excellent, I can’t help but be fairly skeptical about the sustainability of his success. And while I will get into Smyly shortly, this could be viewed as a somewhat “tepid” endorsement of Alvarez going forward as well. Basically if he can keep this up, Smyly has no shot at tasting the rotation during Sanchez’s stay on the disabled list (which I believe will be longer than some expect).

Despite Alvarez’s impressive 2013 peripherals, Smyly has been better recently and over his career in the minors.

Even if Smyly doesn’t make the rotation, he’s been incredible as a “long reliever” this season for the Tigers. He’s vultured three wins and has two saves on the season to go along with 46 strikeouts in 43 and two thirds innings. He’s most certainly owned in American League Only already, but he likely won’t cost much to acquire.

Alex Torres- Relief Pitcher- Starting Pitcher- Tampa Bay Rays: Torres is most certainly available on all waiver wires because of his high risk. Torres was looking like a failed prospect, having not broken the big leagues until this year, where his 18 innings so far have finally shown his promise. Torres has been around since 2006 with the Angels and was a part of the Scott Kazmir trade. However, many forget that he’s just now turning 25 years old. Right now Torres is working out of the bullpen, and he’s been extremely effective in a long relief role (like Smyly), so there’s a chance he remains there, but Torres has cut his walks down to 2.54 per nine innings in his current 18 inning sample. In other words, the Rays have done their reconstruction project that they did on Rodney, on Torres, who has averaged five walks per nine innings over his career so far. I won’t blame you if don’t buy in, but he’s widely available and will be very valuable as a middle reliever who will get a lot more innings than even a Kenley Jansen would.

Alex Colome- Starting Pitcher- Tampa Bay Rays: Colome is more than likely the next in line to join the rotation should fellow Ray Chris Archer continue to struggle mightily. Colome started once already this year, going five and two thirds innings, with seven strikeouts, two walks and only five hits and one run allowed. Colome, like Torres has had his fair share of walk troubles, but not as bad. The 24-year-old right hander finally logged a walk rate lower than 10% this season in 70 innings across 14 starts with the Triple-A affiliate the Durham Bulls.  Colome has averaged an 11.75 percent walk rate over the past 4 years, spanning Double-A and Triple-A. He is very interesting as an add in AL-Only leagues and is likely widely available.

Jose Cisnero- Relief Pitcher- Houston Astros: Jose Cisnero is probably a guy you’ve never heard of. In fact, he’s on one of the worst teams in a not so high leverage role. However, he has put together an incredible season of 30 innings of relief work to date. Cisnero is sporting a 21.7% strikeout rate and a 6.2% walk rate so far in those 30 innings of relief, with a 2.35 ERA and a 2.48 FIP. Cisnero actually was pretty darn good in Double-A in 2012 as a starter, racking up a 25% strikeout rate and a 9.9% walk rate in 108 innings. Seven out of Cisnero’s ten appearances have been the multi-inning variety, lending some credibility to the chance that Cisnero is one of the candidates to move into the rotation should someone go down with either an injury or chronic suckiness.

Adam Warren- Starting Pitcher-Relief Pitcher- New York Yankees: Warren was recently recalled by the Yankees following Mark Teixeira’s trip to the disabled list. Warren currently owns a 27:9 strikeout to walk ratio and has been excellent this season with a 3.11 ERA. He is currently the Yankees long relief man and is likely to gain access to the rotation should David Phelps continue to struggle. He’s a better option that Vidal Nuno.