I’ve written about Patrick Corbin here at The Fix before. I decided to revisit Mr. Corbin after a Twitter conversation between myself and Fangraphs’ Eno Sarris last night. Basically the conversation went a little something like this. Eno made the point that Patrick Corbin doesn’t seem to be elite at any facet of pitching. I was inclined to agree, without looking, that he seemed to be more of a “sum of all parts pitcher.” I was in no way trying to diminish Corbin or his achievements, just stating my belief that he was good at many things, but not great at anything.

My mind wasn’t quite as made up once I began perusing Fangraphs and Brooks Baseball to see how he compared to other pitchers. I’ll try not to harp on anything I touched on in July unless something has changed significantly from the original piece. Let’s dig in.

The first thing I mentioned back in July was Corbin’s increased velocity. Still good on that front; both variations of his fastball (sinker/2-seam & 4-seam) have sat around 92 MPH on average all season. The pitch mix, however, has changed a little since my previous piece. 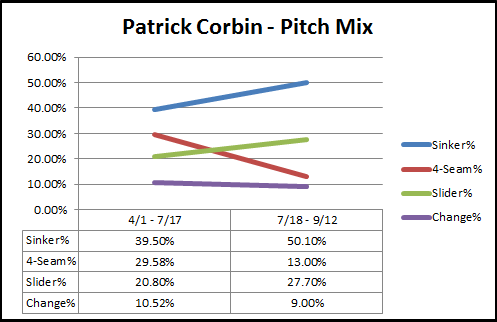 Corbin was already pretty dependent on his slider, but he’s become even more dependent on it since mid-July. Despite the fact that he is using it more, he’s still getting nearly the same amount of whiffs that he did in the first half of the season (27% versus 25.5%). The other large change is the dramatic increase in his sinker; granted there could be some classification issues with pitchf/x, but not 10% worth. My initial thought when I saw this was: “He must be making an effort to get more groundballs?” But his GB% has stayed relatively the same throughout the season. There had to be a reason for the change, so my next guess was that maybe he is simply more comfortable with the 2-seam?

His command numbers show that to be the case. From July 18th until now Corbin has thrown his 2-seam for strikes 69.5% of the time (62% league average) compared to only finding the zone with 59.4% of his 4-seam fastballs (64.4% league average). I’d bet pretty heavily on Corbin’s command on his 2-seam being the reason for its increased usage. Corbin’s slider is still pretty much untouchable, by the way.

Command is a big reason why. As you can see below, he either buries the slider onto the back foot of righties or runs it low and away to lefties. It’s tough to do anything with those pitches.

Is Corbin Elite At Anything?

We know Corbin isn’t elite at getting groundballs (29th for qualified starters). He isn’t among the league leaders in K%. Is he actually elite in anything? I was somewhat surprised to see that he actually was.

These are a few of my favorite stats to look at when I evaluate pitchers. Corbin is the absolute best at getting ahead on the first pitch. His 70.3% mark this season represents a 12 percent increase over his 2012 campaign. If there is an area any pitcher would like to improve upon, I’d think getting ahead would top the list. We’ve noted that despite his swing and miss stuff his K% isn’t elite, that’s proven again by his K%-BB% (if you want more information on why I use that metric as opposed to K/BB read here). His O-Swing and O-Contact rates are top 10 out of all qualified starters (84 pitchers). I’d qualify that as elite, or at least on the cusp. The swinging strike rates and contact rates are also very promising. Although, I am curious as to why the high swinging strike rate doesn’t result in more strikeouts. Could they be on the way? It’s not listed in the chart above, but Corbin’s slider is ranked as the 9th best in baseball according to Fangraphs’ pitch values.

We’ve now established that Corbin has been elite at a few aspects of his game in 2013. The best news is that the things he is elite at are pretty much in his control. He controls how much he gets ahead and unless his slider turns into a cement mixer overnight he should continue to get batters to chase at a high rate.

Should We Be Skeptical Going Forward?

One area that Corbin his seen a dramatic improvement of this season is his ability to suppress homeruns. His hr/fb rate sat at 13.5% last season, but it’s currently at 9.3% this season. I believe there are a few factors that have gone into this improvement. Those include: increased velocity, better pitch utilization, and the 2-seam.

Corbin’s 2-seam is denoted by the second graph. Pitchers implement this pitch due to the movement, whether it’s downward or horizontal. Corbin’s 2-seam has a natural sinking motion along with a fair amount of horizontal run. This increase in movement in comparison to his 4-seam makes the pitch much tougher to square up. The rate could tick back up some, especially due to playing in Arizona, but I don’t think it’s a complete fluke by any means.

I believe a little more in Patrick after doing the research for this piece. Eno asked me what ERA I would guess Corbin would post in 2014, I went with a 3.30. Eno decided on 3.60 (without looking). Which one of us is closer and what’s your over/under?