Those of you lucky enough to advance to the next round of your fantasy playoffs, congrats! You’re now one step closer to what you’ve worked so hard for this season and now now is no time to let off of the gas. I know fantasy baseball drafts are revving up and many of you have to put some attention in that direction, but you don’t want to take your eye off of the prize here when it matters most. In fact, let The Fix do the hard work for you for baseball and purchase our steal of a draft kit that has all of the info you’ll need quick and easily for you to be ready for your draft(s). The baseball crew did a ridiculous job putting it together and it is loaded with content to set you above the rest of your league from day one.

Now, back to what you’re here for, fantasy hoops knowledge. Going to keep it pretty simple this week as you’ve done all the toughest work this season, now it is just making small maneuvers to finish things strongly. Remember in redraft daily lineup leagues to keep that advance at all costs mentality.

If you have already advanced when reading this or you think it’s likely that you advance, it’s time to look ahead a little bit. Don’t dare make any moves for next week if this week’s matchup is still close, but if you have a comfortable lead and can make some moves that don’t kill you this week and also helps you for next week then do it. Take a look at who your next round competition will be and compare your stats this past week (and the past few weeks for while you’re at it for a better idea) and see what categories you should win handily and which categories you have no chance in. Anything you have no chance in, just forget about totally. Focus on five to six categories that you believe you can take and go full speed ahead at those. If you’re in an eight category league and you’re the better seeded team, check to see how ties work. If ties go to the better seed, like ESPN standard, then you need to focus on five categories but know that even four is enough. There’s no shame in advancing via a tie, just move forward.

I’m not telling you to drop Ricky Rubio because you have no shot at winning assists and steals but need to win points and FG%. Holding a player like him in a situation like that is really tough to do but (unless it’s the championship then screw it, do what you’ve gotta do) you don’t want to drop a player like him until you know you’re in desperation mode and it has to be done. I would just advise taking other routes before you take a plunge like that. In the end though, you must survive to the next round at all costs to have a chance one way or the other in it.

Check my previous columns for tons of potential waiver wire options, but here are a few I either haven’t mentioned at all or it’s been a good while and needed re-mentioning:

Avery Bradley (owned in 20% of leagues) – Looking for a boost in points, treys and decent steals the rest of the way? Look no further than the freshly back off of an injury and very athletic, Avery Bradley. After a couple of games of being eased back into action, Bradley has played over 35 minutes the past three games and delivered with great statistical outputs. Over those three games with monster minutes Avery went off for 20.6 points while also snatching four steals and hitting a freakish 11 trifectas. He’s never hit from deep at such a rate but he’s shot it with confidence the past few games and it seems like he worked on his jumper while sitting out a good while with an ankle injury. Look for Bradley to continue to get all the minutes he can handle on the tanking Celtics and should continue to provide solidly in the above mentioned categories. Bradley is fine to own in any league if you need what he can give you. If nothing else, he’s a fantastic stream play for any team.

Gary Neal (2.5%) – There’s not much I can say here that my main man Sam didn’t already lay out beautifully in his most recent column. Neal has scored in double digits in nine of his eleven games with the Bobcats and shot a NSFW 48% from the field, which is quite rare for an off the bench three point specialist to shoot at such a rate. Neal will continue seeing 25+ minutes of work while producing quality points, threes and beneficial percentages for the remainder of the season. Here’s a look at Neal’s beautifully green shot chart since joining the Bobcats: 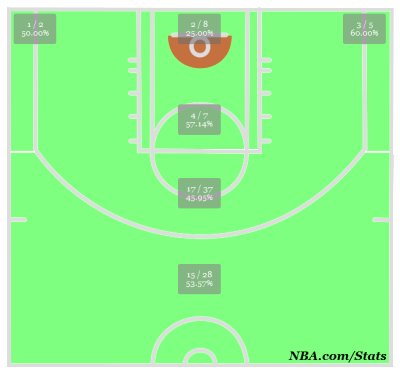 Gorgui Dieng (10.9%) – This time last year Dieng was helping the Louisville Cardinals head towards an eventual NCAA National Title. The Senegalese big man has been nothing more than a bump on the Minnesota bench most of the season, but recently due to injuries got a shot at the starting center gig. Dieng didn’t waste any time adjusting to the temporary role and rattled off three straight double-doubles. 14.3 boards, 14.6 points and two blocks a game over that three game span is nothing you can just shrug off. Sure, his value is only going to hold up while Nikola Pekovic is sidelined but Pek has a history for nagging injuries. Until word that Pekovic is for sure returning, Dieng needs to be owned in all leagues. There’s nobody reading this right now that couldn’t use a double-double plus blocks machine for their playoff push. Use this monster while you can and enjoy every bit of the perks that come with it.

Dorell Wright (0.5%) – Not a player I am overly high on, but when LaMarcus Aldridge is down with an injury and the Blazers have a five game work week ahead, the price is Wright! Despite only getting around 20 minutes lately, Wright has done enough to be fantasy relevant the last five games. Over those five games Wright is averaging 10.8 points, two treys, 5.2 boards and 0.8 steals which isn’t anything spectacular but it’s not ignorable either. Those numbers also include one nightmare of a night where Wright went 0/8 from the field, so he had four really nice games and one disaster. If you’re in a weekly lineups locking league Wright is a definite target with his decent production spread out over five games for you this coming week. He’s also a decent grab in 12-team leagues if the above scoring/three point shooter options are gone and that’s an area of need.

Drew Gooden (10.2%) – Who would’ve thought that the Wizard’s late season signing of Drew Gooden would land him on any fantasy radars? Here he is though making me write even a brief snippet on Gooden. Gooden has served as an off the bench big man for the Wiz and has surprisingly been bringing some crazy energy to the court with him. The rejuvenated looking Gooden has scored in double figures six of the Wiz last eight games while also doing a respectable job on the glass. Gooden is mostly a deeper league target but could be a fine stream option for owners needing a bump in points and boards in standard leagues if the matchup looks right.

Two more quick mentions to keep an eye on going forward and are deeper league stream options are Tiago Splitter (3.3%) who has put up 11.6 points, 9.3 boards and two blocks a game over his last three. Then, Devin Harris (0.4%) who has been inconsistent but worth noting lately for the Mavericks. Harris could be useful if you need points and assists with decent steals and the occasional three ball.

All percentages were gathered from ESPN.com

If you don’t already make sure to follow me on Twitter @BigZack44 for more fantasy hoops analysis and to answer and of your questions you may have.