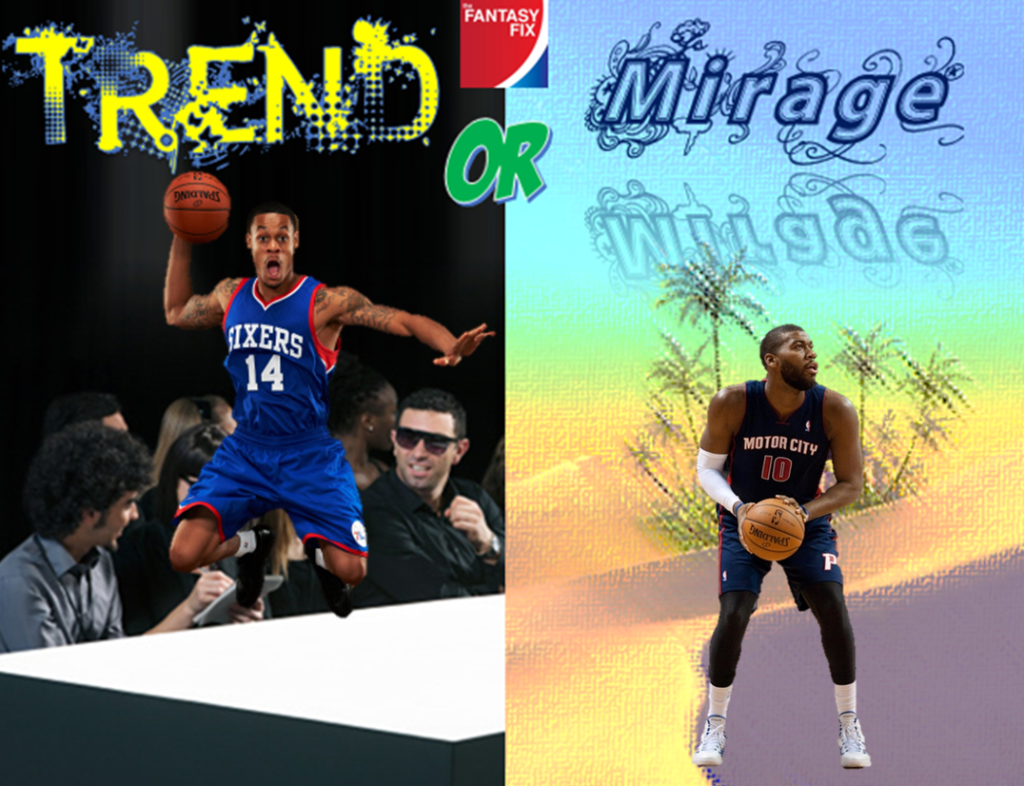 If you’ve ever read anything by me or seen me ranting on Twitter, you’ll know I’m on the McBandwagon.

What I love about his fantasy game is the ‘bonus’ stats – the rebounds, the steals and the blocks from the SG/SF positions. Any SG can average 12-14 points with good free throw percentage and some 3s, very few can do the McDamage he does in terms of defensive stats and rebounding, while still contributing in the ‘traditional’ SG categories.

With the Sixers seemingly trying to live up to their new logo, the writing is on the wall for McDaniels to get a nice uptick in minutes, which can only lead to more fantasy gems.

The key to McDaniels’ value is minutes, because when he gets them he produces top 40 level value, with impressive stats across the board. He’s played at least 28 minutes (a reasonable figure on this youth driven team) in 7 games this season, averaging 14.4 points, 6.1 rebounds, 1.3 steals, 1.4 threes, an insane 2.3 blocks, along with 83% shooting from the line.

There is downside, the 42% shooting from the field as well as 2.4 turnovers, but on the season he’s shooting 44% and only turning it over 1.8 times per game, but these are minimal for a guy you likely got with a last round pick or off the waiver wire.

The Pistons are sputtering along in impotence and in potence, in quiet solitude, blasting across the alkali flats in a jet-powered, monkey-navigated…sorry I lost myself there. Basically the Pistons have no direction and Monroe has no fantasy value. That will change, as the team will have to decide sooner rather than later what they’re going to do with their big yet unbalanced frontcourt.

The numbers on the season are solid: 14.4 points, 9.4 rebounds, 2.0 assists and 48/74 shooting splits. However, prior to his latest explosion against the interior defense-deprived Celtics, Monroe was producing waiver wire level stats of 8.0 points, 7.8 rebounds, 1.5 assists and just 36/57 splits.

Essentially, this big lug has too much going for him in terms of youth and skills to be toiling away at his current low level. If you’ve got a hot player you’re looking at moving because their current value won’t hold for the full season (ie Alec Burks or Nikola Mirotic), then offer them up for Monroe.

Frye’s play of late has been bad, very bad.

As a Suns fan I was sad to see Frye depart the desert, but at the price the Magic are paying I am glad to see the back of him. It has been documented how good he has been on the offensive end for the Suns, particularly playing alongside Goran Dragic last season, but his play this year has the Magic in a tough spot in terms of player development and financial commitments.

Frye is what he is, a specialist three point shooter who stretches a defense and allows Nikola Vucevic to operate inside, with Victor Oladipo and Tobias Harris slashing and driving from the outside. He’s not a good rebounder, nor does he block shots, steal the ball or get a decent amount of assists, so really there’s no reason to add Frye to your team and I’d be looking to move him for another slumping player.

The Magic may need to face facts and see they made a bad signing, while hoping another team sees some potential in Frye still – wouldn’t he look solid off the bench for the Thunder or Mavericks?

The Knicks are another train wreck that are as compelling to watch as they are difficult to figure out.

It amazes me that Derek Fisher continues to start Quincy Acy and Iman Shumpert, despite neither proving to be anything other than end of rotation players in their careers. Why not just roll Cole Aldrich out there, at least he showed something when he got big minutes last season – they even went 10-1 when he played at least 10 minutes!

Fisher started Stoudemire against Brooklyn on Tuesday night and then again versus Cleveland last night, where he responded with a healthy 18 points, 9 rebound, 8-13 field goals outing. Over his last four games he’s averaged 18.5 points, 9.8 rebounds, 1.3 assists, 0.8 blocks and 64% shooting from the field. He’s only made 67% of his freebies over this stretch, along with 2.8 turnovers per game – but he’s in a contract year and Fisher has to play him to both win games and to drive up the value on his expiring contract.

Stoudemire was an All Star as recently as 2011, and while the poster dunks are more spaced out now, he can still produce when given minutes, so this recent run is more a trend than a mirage.