The NBA Draft lottery balls were selected and the draft order is now officially locked in. The Minnesota Timberwolves became the first team with the best odds to actually land the #1 pick since 2004. The Wolves technically will have the first overall pick for the third straight season after acquiring the two previous #1 overall picks (Andrew Wiggins and Anthony Bennett) in the Kevin Love trade from the Cavaliers. The Lakers moved up two spots to the #2 overall pick while the Knicks fell to fourth in the draft order. The rest went exactly as it was setup before the lottery.

Now it’s time to have some fun mock drafting, projecting what players teams can potentially land at their draft spot. However, predicting what an NBA team/GM is going to do is next to impossible and even the draft “experts” only get a handful of their mock draft projections correct. So, instead of guessing who I think teams will actually select, I will instead put myself in their GM’s shoes and tell you who I would personally select if I were drafting for each franchise in the first round.

This is my mock draft 1.0 and there will be two more versions before the actual NBA Draft occurs on Thursday, June 25th in Brooklyn. This one is so far out that I’m just putting my initial thoughts on who I would take where without over-analyzing just yet. In version 2.0 (mid-June) I will update my picks and add reasoning as to why I made each selection the way I did, and in version 3.0 (a couple days before the draft) I’ll dish out my final choices for each team at each draft slot, analysis of each player selected along with the reasoning for each mock pick made from my mock GM point of view. 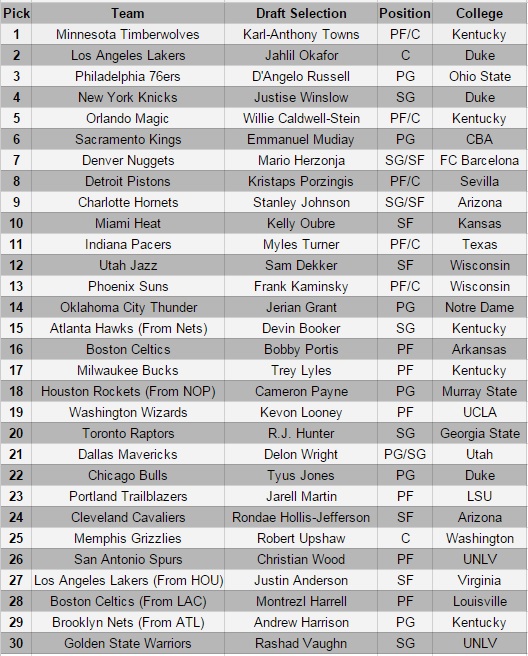 I look forward to your comments on who I have going where but again keep in mind this is who I would take personally in each spot and this is just version 1.0. I’ll be doing a ton more research on both players and teams between now and the 2.0 version.