Hard to believe we’re already twelve weeks in to the fantasy hoops season, but the best is yet to come as we have plenty of time to make the playoff push or maximize our teams for playoff domination. I have been writing for The Fix since week three of the fantasy season, and it has been a great time getting to write about something I follow so closely and truly love doing. That said, when I started off I hit the ground running. I came in trying to put as many players in my posts as possible because of course at that point in the season, there are so many players making their mark and becoming fantasy-relevant. Over nine weeks, I have recommended (to one degree or another) 70 different players, including 23 in the first two weeks alone. I set myself up to be where I am right now… stuck.

At this point in the season, fantasy owners can join their NBA front office counterparts in saying that we know what we have—for the most part. Unlike in the real league however, not all of those hot upstarts that were discovered early in the season were gobbled up in every fantasy league. For that reason, I am doing us all a favor this week and “resetting” my waiver recommendations. Sure, I could bore you by talking about guys that are stream worthy at best in standard leagues like Will Bynum and Evan Fournier, but would that really be helping you or your team? I just can’t sit here trying to sell you on players like that, especially when I’m on record as saying if you don’t have a really solid bottom of roster guy, then stream with that spot all week for better results. I will still bring up players I haven’t named yet whose values are rising, but I will also remind you of players I’ve mentioned before that are still highly available, and more importantly, that are still worthy of your attention. (However I won’t talk about any player a second time that is owned in over 50% of leagues.)

Without further delay, here are this week’s waiver targets:

Marco Belinelli (owned in 7.2% of leagues) – Since the ball dropped on December 31, Marco has been dropping the ball in the bucket, on an absolute scoring rampage for the Spurs. A few days ago, teammate Danny Green was determined to be sidelined for about four weeks, and that only further fuels the fire for Belli. Over his last eight games he has averaged 15.8 points, 2.1 treys and 3.1 assists while shooting 54% from the field. Before Green’s injury, Marco’s minutes stayed closer to 25 a night, but since Green has been out, Belli has gotten over 30 minutes each game. Look for Belli to keep putting up nice lines over at least the next month as he plays a key role in the Spurs offense. To expand on that, Marco’s usage rate this month is up to a season high 22.8% and climbing by the game since Green has been absent from the rotation. He’s also scoring an impressive 25.0% of the Spurs offensive points when he’s on the court. That’s a real healthy number especially on a team as balanced as San Antonio.

Courtney Lee (3.3%) – Courtney Lee is an old favorite of mine as a Magic fan, as he was a part of the 2008-09 team that went to the NBA Finals. Lee didn’t do a whole lot on offense but he was an excellent defender in his rookie season in Orlando. Ok, let me drag myself out of memory lane of the Magic’s last great season and get to the present time. Courtney was traded to the Memphis Grizzlies just over a week ago and has stepped right in and played quite well. He’s started the last four games now and Coach Joerger has stated that he really likes Lee starting next to Tayshaun Prince. Lee has put up more than 14 points, one steal and one trey while shooting 51% from the field and 100% from the free throw line (12-12) in six games for the Grizz. This all could come to a halt when Tony Allen returns from injury but if Lee continues to show himself this useful, his hold on the starting gig isn’t at all out of the question. At the least, he should carve out a decent role off the bench. As of now, Lee should be owned in anything deeper than twelve teams, and if he keeps it up, is worth consideration in 12-teamers.

Luke Ridnour (0.4%) – Ahhh, Larry Drew at his sinister work again. You never know who is going to be receiving the majority of the work load from night to night with this guy. Right now, Luke Ridnour is his go to guy and has back-to-back starts at SG for the Bucks. Luke has averaged over 30 minutes a night in January, and has put up enough statistically to make himself an add in most leagues deeper than 12 teams and even an option in shallower if you’re in need of assists. In the last seven games Ridnour has posted averages of 9.1 points, 5.9 assists and 1.3 treys. I know those numbers don’t make you want to race to your waiver wire, but those six assists a night can be quite useful and I’d expect to see the points rise if he continues to get big minutes.

Patrick Patterson (2.0%) – Pat Pat has been given a healthy opportunity lately to prove himself worthy of playing time off the bench and he’s done quite well with it. He’s fit in nicely with his new Raptors team and is playing his role every night. He’s averaging 24 minutes a night and has been great from the field, especially in January. You’ll see on his shot chart below that it’s a sea of green goodness out there for Pat Pat lately. 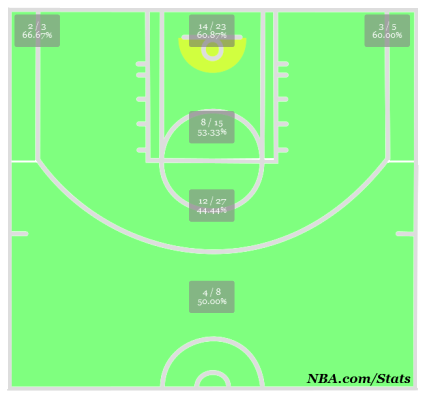 Pat is averaging 12.8 points, 5.6 boards, 1.8 assists and surprisingly one trey per game over his last eight. There’s nothing overly spectacular to see here but Pat seems like a safe option if you need a PF that can pitch in a little in the above stats at good percentages. He’s worth consideration in 12-team leagues depending how shallow/deep your wire is.

Wesley Johnson (6.6%) – I talked about Wes in my week five column as well as very briefly in my piece on Kobe’s more recent injury. I said that I believed Wesley could actually step up his game as the Lakers would need more out of him, and he’s actually been knocking down threes more consistently (twelve in his last six games) and scoring 13.0 points per game in January. He should continue to see big minutes and remain the starter at SF while continuing to reasonably contribute in steals and blocks. Wes should be owned in most 12-team leagues just because of his ability to fill the stat sheet for his owners.

All percentages were gathered from ESPN.com

If you don’t already please give me a follow on Twitter @BigZack44 for more fantasy hoops analysis and to answer any of your questions.