Recent NBA drafts have been dominated by that dreaded adjective — “potential”. Bradley Beal, for all his merits, did not fall under this high ceiling category.  The book on Beal was concrete: A+ character, fundamentally sound, tremendous shooting stroke, old-school shot distribution, good (but not great) athleticism and undersized. His 6’8 wingspan and sturdy frame partially alleviated height concerns, and his solid image overshadowed lack of game breaking athleticism.

As a freshman on a balanced Florida team his collegiate numbers didn’t burst off the page as top-5 material. However, his dramatic improvement in both efficiency and productivity in the month of March secured him a spot at #3 overall. While his skill-set is anything but raw, the 19-year old Beal is short on game experience against upper echelon competition. If the jump from high school to college was to be any barometer, his adjustment to the speed and physicality of NBA action was going to provide an initial shock to his system.

Now 51 games into his professional career, improvement is once again the overwhelming theme:

Given the depths from where he started, his current climb to 41% FG and 38% three-point accuracy is no mild feat. In seven games since the All-Star Break (he’s missed the last three with a sprained ankle) Beal has taken his form up a notch further, averaging 20.3 points on 49% FG (45% 3PT), 4.6 FTA, 6.9 rebounds, 2.4 assists, 1.1 steals and 0.9 blocks. During that period he ranked 11th in the league in scoring and 2nd in guard rebounding behind only Paul George. Suffice to say, the combination of a healthy John Wall and an in-rhythm Beal has resulted in a highly combative Wizards team on a nightly basis.

A quick glance at Beal’s NBA.com shot chart and his hot/cold spots are not difficult to uncover: 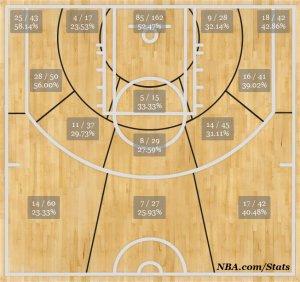 His shot distribution is defined by balance, with 26.5% of his attempts coming inside the paint, 39% in the mid-range and 34% from distance. He loves the corner three-ball, connecting on a staggering 58% (25/43) from the left corner and a healthy 43% (18/42) from the right corner. He shows no reluctance letting fly in the mid-range game (246 attempts), but a 36.6% connection rate highlights his difficulty creating clean looks for himself at 6’4. Beal is more effective when moving without the ball rather than creating offense in isolation. 74% of his baskets have been assisted. Inside the restricted area his powerful upper body allows him to create space, hitting on 57% despite 27 blocks against within eight feet.

Even sans the perks of a dominant ball controller, Beal has often been Washington’s go-to-guy in crunch time as a rookie; not always with positive results. He’s taken 35 shots in the last five minutes of games with his team +/- 5 points (compared to 28 for John Wall) and made nine (26%).His shining moment to date was a game-winning leaning jumper as time expired to defeat Oklahoma City on January 7th.

An all too willing passer in college, consistent assertive play from Beal will go a long way in certifying his role; either as a future star, or a rung below as a very solid foundation player. Amelioration in off-the-bounce shot creation and creativity will also be required to take that next step. Because of those limitations, he’s too often occupying single-digit or low-teens shot territory and he’s yet to crack the 30-point barrier. For those awaiting the arrival of his next massive slump, don’t hold your breath. Mr. Beal and his sweet jumper are trending onward and upward.