I first scouted Michael Kidd-Gilchrist back in 2008 when he was just a slender sophomore at St. Patrick’s High School. Playing alongside the likes of Kyrie Irving and Dexter Strickland, it was MKG who was the chief product of the hoops hype machine — the next big thing. He had all the physical gifts in the world and the relentless work ethic, on and off the court, to match. Three short years later that package of explosiveness, versatility and defensive wizardy earned him the #2 selection in the NBA draft. But his offensive skill set remains quite raw, with his jump shot hesitant and mechanical, and his off-the-dribble creativity absent.

Given the brief scouting report mentioned above, it’s not surprising that Kidd-Gilchrist is most effective when finishing in transition and slashing towards the rim:

In the opening two months of the season, when his game and patterns were still a mystery to opponents, MKG was scoring 11 points on 51% efficiency and attempting 8.5 shots per game.  However, since approximately mid-January his production has plummeted. Prior to last night’s 11-point outing he had not cracked double figures scoring (or shot attempts) in 14 consecutive games. His playing time has dipped as well with Gerald Henderson and fellow rookie Jeffery Taylor occupying minutes at the wing spots, and Ben Gordon providing a legit outside threat at two-guard. While it may appear that he’s lost aggressiveness (it should be noted that he suffered a concussion on January 2nd), it’s really a matter of defenders playing to his weaknesses by daring him to shoot: 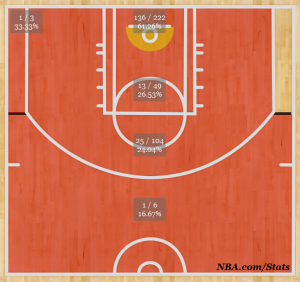 While this article focuses on MKG’s offensive shortcomings, he’s already recognized as a defensive stalwart. He possesses the quickness to hound point guards on the perimeter and the strength/length combination to contend with bigger forwards on the interior. He’s grabbing nearly six rebounds (1.7 off.) and upwards of a blocked shot per game. Kidd-Gilchrist is not used to failure on the personal or team level, but as a 19-year old rookie in Charlotte, he can’t hide from it. His trials and tribulations present similarly to a young, albeit more polished version of Gerald Wallace. Will he develop into a comfortable range shooter? Unlikely, but judging from past performance, he’s liable to develop the NBA savvy to best utilize his assets in the half-court offense.

While Singler is technically considered a rookie after playing in Spain last year, he was drafted with the 2011 class so I’ll interject him here.  His calling card three-point bombing has dipped in the month of February, but his overall production has greatly increased. In ten games this month he’s scoring 11 points on 49% field goals, still hitting 36% of his treys (0.8 makes) and adding five boards. The Pistons are saturated with point/combo guards, but have a noticeable cavern at small forward.  Singler will be forced to see substantial minutes going forward, and he’s owned in just 12% of Yahoo leagues. Not spectacular by any means, but a solid depth option.

Fantasy Baseball Draft Strategy: Why Robinson Cano Is Not a 1st- Rounder