Below are my favorite plays from various price ranges at each position for this week’s early college football contests on DraftKings. Within each price range, players are listed in the order in which I would prefer to roster them. If you’re looking for additional CFB DFS content, check out the work of Ben Pritchett of FantasyInsiders.com (@naturalslugger) and Chris Kay of LuDawgs.com (@realestchriskay), especially if you want to play the late contests as each will write up plays for that slate of games.

This gets explained in some form or another in my college football post each week, but the methodology for picking players should be mentioned. Essentially each player’s price and each player’s performance to date are compared to the average price and average performance of players at their position that are also available to be selected in early contests. If a player’s production is further above average than his price, then he’s probably worth playing. An adjustment is made for the quality of defense each player will face that week, so essentially the formula is this:

That’s a really long setup to recommending Everett Golson (Notre Dame, $8,800). Golson has produced more fantasy points this year than any other QB available in the early games yet he’s only the third most expensive QB. He has produced slightly more than Bryce Petty on a per opportunity basis (pass attempts + rushes) yet Petty is $600 more expensive than Golson.

If you don’t want to pay up for Golson, Sam Richardson (Iowa State, $7,600) has the best matchup of any QB in this price range against Kansas. Prior to an adequate 21 point performance against Oklahoma last week (thanks, rushing touchdowns), Richardson averaged 30.5 fantasy points in his previous two games. Those were two close games in which Richardson threw over 50 passes in each game. In the blowout loss to Oklahoma he only threw the ball 40 times. Iowa State is only favored by four points, so this game could lend itself to a higher volume of passes.

No quarterback in this price range has production to date that outpaces his price for the week, but once you make an adjustment for matchup, Dane Evans (Tulsa, $6,700) becomes a well above average play. In fact, only one other quarterback grades out as a better value according to my system (more on that other quarterback in a moment). The reason the strength of schedule adjustment is so huge for Evans is because he is facing SMU who is allowing 9.2 yards per pass attempt, which is third worst in the country, and 313.6 passing yards per game, which is fifth worst in the country. That is despite opponents only attempting an average 34 pass attempts per game. Even if Tulsa blows out SMU, Evans won’t have to see a super high volume of attempts to be valuable.

Brissett was listed in this post last week as a candidate to bounce back against Syracuse. He wasn’t bad against the Orange, but the game ended up being a fairly low scoring affair with just 41 total points. But Vegas has the over/under for NC State and Georgia Tech at a well above average 60 points this week. If that game hits 60, Brissett should return enough value for this price. And he obviously has upside.

If no adjustment for matchup was made, Brissett would have actually trailed Patrick Towles (Kentucky, $4,700) as the best value of the week. But Towles will face Georgia who ranks 19th in the country in passing yards allowed per game. But the matchup isn’t prohibitive. Arkansas’ Brandon Allen threw for 296 yards and three scores against the Bulldogs two weeks ago. And the passing yards allowed for Georgia are skewed somewhat by the fact that Florida had no need to throw the ball against Georgia last week when they blew them out by running the ball for 418 yards while only attempting six passes. Brissett is the better play, but if you need to free up $300 to spend somewhere else, feel free to move down to Towles.

No running back in this price range grades out as a good value once matchup is accounted for, but Melvin Gordon (Wisconsin, $9,900) comes close to justifying his price while most of the others in this range don’t come all that close. Indiana’s Tevin Coleman looks like a good play at $7,800 before adjusting for matchup, but he’s facing Penn State who allows the fewest yards per carry in the country. Gordon has a much better matchup against Purdue who is 77th in the country, which makes Gordon worth paying up for.

The only other RB in this price range that comes close to being worth his price is D.J. Foster (Arizona State, $6,000). The matchup with Notre Dame isn’t great, but it’s not prohibitive. If he was priced any higher, he wouldn’t be worth paying for, but this is about what he should cost.

The reason the discussion of Foster was so short is because you might rather save a couple hundred bucks and roster Cameron Artis-Payne (Auburn, $5,800). CAP will face Texas A&M this week who ranks 82nd of 128 teams in fantasy points allowed per game to running backs on the ground (meaning receptions and receiving yards not included). The matchup and the slightly lower price make CAP the better play. Moreover, CAP is getting a lot more work than Foster, especially recently. CAP has at least 25 carries in each of his last two games while Foster only has 23 carries in his last two games combined. Come to think of it, CAP is probably the play of the day at running back.

Corey Clement (Wisconsin, $4,900) has been plenty useful at times as Gordon’s backup. He’s got 100 yards and a score in three of Bucky’s eight games. Admittedly, this matchup isn’t quite as good for the Wisconsin ground game as it was in the three games where Clement topped 100 yards, but this game still has blowout potential. But blowout or not, there’s a good chance that Clement gets 15-ish touches. If he can get in the end zone, he’ll be worth his price.

Terron Ward (Oregon State, $4,200) can produce for you in a couple of ways. First of all, he’s his team’s primary goal line back with a majority of the team’s rushing touchdowns. He has two scores in three of his eight games, so he’s a bit hit-or-miss, but that means he has upside, something you don’t always see from backs in this price range. He can also do some damage in the passing game, which is always nice with DK’s PPR format. Unfortuantely, he’s a bit hit-or-miss in that respect as well with four catchers or more in half his games and one or zero catches in the other half of his games.

If you need a punt play, Wendell Smallwood (West Virginia, $3,500) may be about as cheap as you can go. On the bright side, Smallwood has at least 15 carries in each of his last four games. The problems are that he doesn’t catch passes or get the goal line work. And the matchup with Texas is below average. You should probably have Ward as your floor, but Smallwood could be worth a shot if you have to go ultra cheap.

There may not be more of a must-play than this slate’s most expensive receiver, Keevan Lucas (Tulsa, $8,000). We discussed how great the matchup is when we discussed Lucas’ QB, but Lucas would be a fine play in even an average matchup at this price as he’s the sixth highest fantasy scoring receiver in the country. If you’re only going to make one lineup, Lucas has to be in it. If you’re making multiple lineups, make sure you have heavy, although not complete, exposure to him. You can obviously stack him with Evans, but he can be rostered without his QB as well.

No other receiver in this price range grades out as an above average value, but Jaelen Strong (Arizona State, $6,800) comes pretty damn close and closer than anyone else. If you take a look at his game log, you’ll see that he has scored in six of eight games. And in the two games where he didn’t score he had exactly 146 receiving yards in each game. That means he’s got a nice floor of around 15 points. But he has upside as well as he went for 200 yards and three scores against USC. If you can make it work, having Lucas and Strong in the same lineup would be nice. And going back to the running backs, Strong being such a strong play is another reason to go Artis-Payne over Foster as Strong seems more likely to do ASU’s damage.

This is a tough group to pick from, which is even more of a reason to try and squeeze Lucas and Strong in a lineup together. Everyone has flaws. Penn State’s DaeSean Hamilton catches more balls than anyone in the group, but he only has one touchdown this year. Jamison Crowder has a lot of upside, especially for this price, but prior to scoring two touchdowns last week, he hadn’t scored since he scored twice in his first game of the season. John Harris is a guy who has showed up in this post a couple of times this season, but he has the worst matchup of anyone in this group. K.D. Cannon has found the end zone six times, but he’s been basically worthless in four of his last five games.

If you’re going to go with one of those guys, you have to go with one of the guys who can find the end zone. That means Crowder (Duke, $5,900) and Cannon (Baylor, $5,700) are your choices. But they’re risky, so they they’re probably just GPP plays. Of course if we’re limited to GPP plays in this group, feel free to save a little money and go with Deandre Smelter (Georgia Tech, $5,000).

For all the uncertainty in the previous price range, Isiah Myers (Washington State, $4,300) feels like a much better option. Not that Myers can’t bomb himself as he has fewer than 30 receiving yards in three of nine games. And with Connor Halliday down and Luke Falk taking over, that offense might slow a bit. But any Mike Leach offense is going to be high volume through the air no matter the QB, so he should continue to get enough catches to have a high-ish floor (averages 6.77 receptions per game). But he’s not just a guy with a decently high floor at a relatively cheap price. Myers also has some upside with four multi-touchdown games. Myers’ value is another reason to consider skipping the middle tier if you can.

After Myers we have a couple of cheaper versions of the guys in the medium tier but with a lesser chance of having a big week. If you need to punt a receiver spot and are looking for some upside, consider Deontay Greenberry (Houston, $3,900) and Geremy Davis (Connecticut, $3,200).

Tight end is fairly simple this week. Either you have money for E.J. Bibbs (Iowa State, $3,700) or you’re punting with Blake Bell (Oklahoma, $2,500). No tight end in this slate averages more points per game than Bibbs, and it’s not that close. Bell has three touchdowns in his last two games, and at six-foot-six you can see how he could be a consistent red zone option. But he’s going to have to score to produce for you.

You should probably build the rest of your roster and fill in your tight end spot with whatever you have left. That means you’ll probably end up with more Bell because you’ll want to spend as much as you can elsewhere. But if you have tight end left to fill and you have between $3,200 and $3,600 left to spend, try to go back and save some extra money in a spot to be able to afford Bibbs. 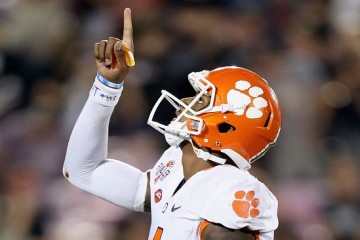 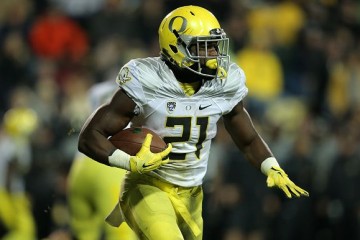 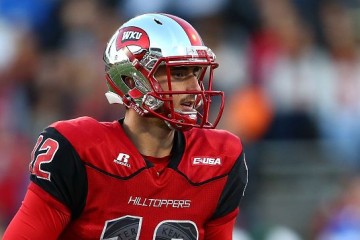 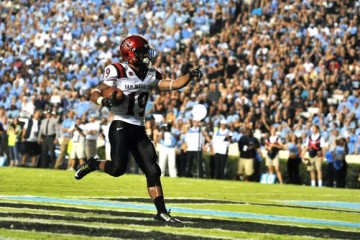