We have a real barnburner this week. Just kidding. We have the worst team in the league, a team flirting with the worst team ever conversation against a good but painfully boring division rival. There is no way to put a positive twist on this one. If your fantasy players are in this game, enjoy your suffering. This is as bad as it gets when it comes to matchups. There also aren’t a ton of fantasy stars in this game. Nonetheless, there are a few.

Kansas City Chiefs: Key Players
QB Alex Smith
Smith is a game manager, which unfortunately in fantasy football means he can’t manage to help you win. He has thrown only 11 TDs this season and his team managed to beat the Seahawks this week with him on throwing for 108 yards. As a matter of fact, they’ve won the last three games without him breaking 200 yards and he’s only thrown for 250 yards once all season.
Verdict: Sit Smith. You can’t win a Super Bowl with Smith and you can’t win a fantasy championship with him either. The Chiefs will learn the hard way, don’t make the same mistake.

RB Jamaal Charles
Charles is the fantasy superstar in this game. He is an elite RB1 and after a slow start to the season, mostly due to injury, he is red-hot. He is playing like the top RB he was last season. He is a no doubt top five RB the rest of the way and possibly higher.
Verdict: Start Charles. He should have his way with the Raiders. Last season when he visited Oakland (and knocked me out of playoffs) he totaled 215 yards and five TDs. They were better last season…

WR Dwayne Bowe
No Chiefs WR has caught a TD this season and seven WRs have more yards than the entire Chiefs WR corps. I think you can see where this going.
Verdict: Sit Bowe. The only positive about him is his name being used for Homer Simpson’s fantasy football team (Somewhere Over the DwayneBowe).

TE Travis Kelce
Kelce has been the one strong point of the Chiefs passing game this season. He hasn’t been great but he has been solid. He has 37 receptions, 475 yards and four TDs. The redshirt rookie is off to a solid start to his career and should continue to build off it.
Verdict: Start Kelce. He is a solid option in most formats. A definite start in 12-team leagues and a solid option in 10-team leagues as well.

Oakland Raiders: Key Players
QB Derek Carr
Carr is dealing with a quad injury and has been limited in practice. He is still expected to start on Thursday. When a team is winless at this point of the season, you probably don’t want to start their QB. That’s a pretty safe rule to live by.
Verdict: Sit Carr. Like I said, he can’t even win a game. He may be a decent option in the future, but not this Thursday. Especially against a very tough Chiefs pass defense.

RB Darren McFadden
It’s kind of ironic. McFadden was always really good but couldn’t stay healthy. Now he’s finally healthy but not any good. Cruel fate.
Verdict: Sit McFadden. Unfortunately his best days are behind him and he missed most of them.

WR James Jones
This may be the worst collection of WRs ever to play in one game. They are awful. Andre Holmes had a nice stretch but that’s really it. Jones is the top guy now. He actually set a record two weeks ago. He averaged only 2.5 yards-per-catch in an eight catch game. So that’s something.
Verdict: Sit Jones. You only start a WR in this game if you’re extremely desperate.

TE Mychal Rivera
Rivera quietly had a solid rookie campaign last season and is doing the same this season. He is seeing targets and playing well. He is the one ray of light in Oakland’s black hole.
Verdict: Start Rivera. If you’re looking for a TE to plug in, he’s really not a bad option. Somebody has to be somewhat productive on this team, right? 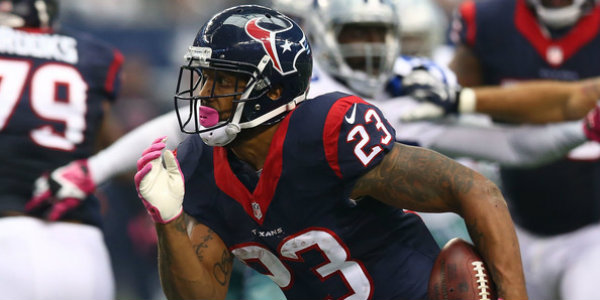