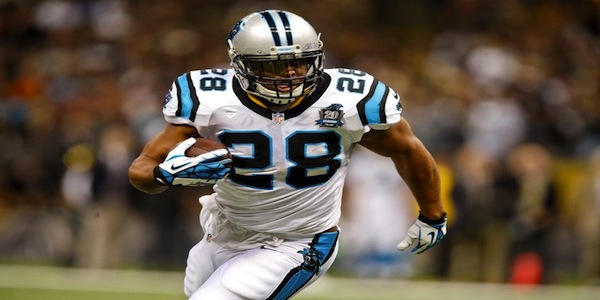 Week 14 of the National Football League is in the books. And with that, football fans are looking towards the fantasy football waiver wire to see if their team can be improved in any way as they continue their push for a fantasy football championship.

Before we get to this week’s potential waiver wire pickups, it’s important to note that I do not have a problem spending my first waiver priority on a few players from the list below, especially if you’re making a playoff push or simply preventing your opponents from grabbing a player that could assist them in their quest for your league’s championship. Also, players listed below are in no particular order, so be sure to read them all.

I’m not sure what year we’re in at this point, but Jonathan Stewart just may be FLEX relevant to finish off the fake football season. In the past two weeks, Stewart tallied 32 attempts for 240 yards (7.5 yards/carry — no, that’s not a typo!) and hauled in 2-of-3 targets out of the backfield. The Panthers get the Bucs — one of the league’s ten most generous defenses to opposing ball carriers — in week 15, so you should feel fairly comfortable rolling him out as a FLEX option in your playoff matchup.

Digging Deeper: If by chance Latavius Murray, Andre Williams or James Starks is available in your leagues, you should be looking to add them as well. For week 15, my preliminary ranking of this group of backs would be Murray, Stewart, Andre Williams, James Starks and Kerwynn Williams.

Consider in leagues: All
Waiver Priority Worthy: 1 and lower
Spend this much FAAB to acquire: 35-40% or more
Players I’d drop for him: Andre Ellington, Jerick McKinnon, Alfred Blue

To the surprise of some, Kerwynn Williams — not Stepfan Taylor, or even Marion Grice — earned the lion’s share of carries out of the Cardinals’ backfield in week 14 against the Chiefs. Williams logged 19 carries for 100 yards while Taylor carried the rock six times for 19 yards and Grice earned just three attempts for six yards. Williams played 26-of-72 snaps for Arizona, compared to just 19 for Stepfan Taylor, 14 for Mario Grice and 11 from Robert Hughes. Williams, a 7th round selection in the 2013 draft out of Utah State, appears to be the favorite to get the majority of work on Thursday for Arizona, but a date with St. Louis isn’t exactly favorable. And to follow,

Consider in leagues: All
Waiver Priority Worthy: 2 and lower
Spend this much FAAB to acquire: 35-40% or more
Players I’d drop for him: Andre Ellington, Jerick McKinnon, Alfred Blue

Moncrief earned four targets in each of the past three weeks for the Colts, but with Reggie Wayne banged up a bit, the rookie’s role could expand going forward. And in those past three contests, Moncrief hauled in 10-of-12 targets for 205 yards (20.5 yards/reception) and two scores. Indy will see Houston and Dallas next — both teams are about middle of the pack in terms of surrendering points to opposing wide receivers — but the volume of pass plays with the nagging injuries of Wayne make Moncrief a must add if you’re still in the hunt for a trophy.

Charles Johnson did it again in week 14, so I’ll keep plugging him into the waiver wire until he gets some more love. Sure, by now most teams are focusing on their daily lineups or the Winter Meetings after being eliminated from the playoffs, so the ownership percentages may not be reflective of his true potential/value, but Johnson should be given a good look for the next couple of weeks. He hauled in four passes on eight targets for 104 yards and a touchdown in week 14 against the Jets, but the Vikings will face the Lions and Dolphins — both are among the top five least generous defenses to opposing fake pass catchers — in the next two weeks.

Consider in leagues: All
Waiver Priority Worthy: 1 and lower
Spend this much FAAB to acquire: 35-40% or more
Players I’d drop for him: Brandon Marshall, Terrance Williams, Cordarrelle Patterson

The Bears have placed star wideout Brandon Marshall on the injured reserve — ending his season — opening the door for sophomore wide receiver Marquess Wilson. The lanky pass catcher has just five receptions on 14 targets for 40 yards this season, but his snap count will continue to rise and could be a nice pivot for Jay Cutler as Alshon Jeffrey and Martellus Bennett draw much of the attention from opposing secondaries.

Consider in leagues: All
Waiver Priority Worthy: 3 and lower
Spend this much FAAB to acquire: 35-40% or more
Players I’d drop for him: Brandon Marshall, Terrance Williams, Cordarrelle Patterson

Strictly streaming defenses at this point if you can. These teams get the Jaguars and Jets respectively in week 15. It’s the playoffs, they could make a difference.

Consider in leagues: All
Waiver Priority Worthy: 8 and lower
Spend this much FAAB to acquire: 10-15%
Players I’d drop for him: your defense on a bye