Below are positional rankings for the 17-game early slate of DraftKings contests on Saturday with some commentary along the way. Keep in mind that salary has a huge impact on a player’s ranking.

Below is a matchup chart I create each week that includes information from Vegas and information on each team’s opponent in terms of their defensive strength. The defensive numbers are rankings from Football Outsiders’ S&P+ ratings. All the info is color coded as follows from most favorable to the offense to least favorable: purple-blue-green-yellow-orange-red-burgundy. 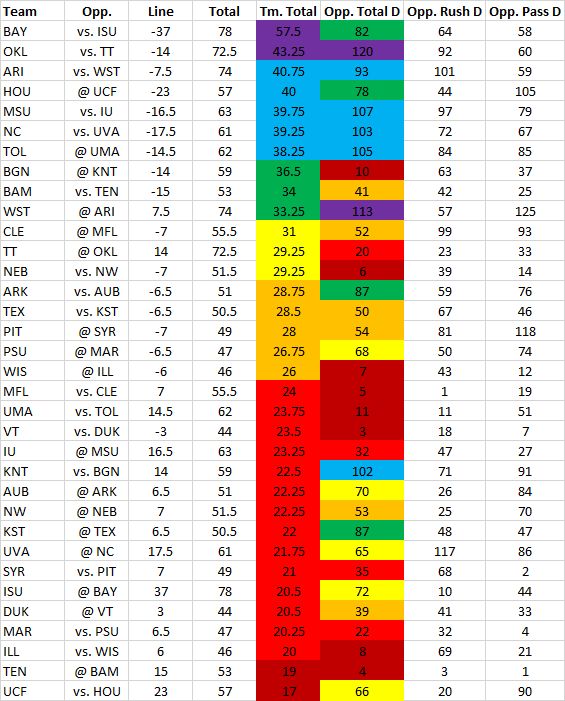 Good luck picking a quarterback this week. Normally I’d say that if there were a lack of good options, but in this slate there are a ton of good options. Expensive, but good. You’ll notice Luke Falk is not ranked here despite having a great matchup against Arizona. But if I ranked four of the five most expensive quarterbacks, who am I really helping? I’m ranking three of those five as it is, so let’s try to narrow it even further.

The reason point-machine Seth Russell is ranked third is primarily because of the guy ranked fourth. See, I don’t trust Eric Dungey as far as I can throw him. We’ll discuss his merits in a moment if you want to go the cheap route, but because I don’t trust a cheap QB, I’m going to try and fit two expensive QBs in my lineups. That’s going to make filling out the rest of your lineup tough, and the $600-$700 I can save by passing on Russell will make it ever-so-slightly less difficult. That’s also part of why Falk isn’t listed here, though it’s also partly because Washington State’s implied point total in Vegas is quite a bit lower than that of Houston, Oklahoma and Baylor. But if you can fit Russell into a lineup with Ward or Mayfield, be my guest. Baylor has the highest team total of the slate by more than two touchdowns.

Just quickly on Ward and Mayfield, they both have very good matchups against UCF and Texas Tech, respectively. Oklahoma has the second highest team total of the slate and Houston has the fourth. Tech rates 120th in total defense while UCF rates 105th in pass defense. And if you like narratives, this is the ultimate revenge game for Mayfield. He’s playing nice in interviews this week, but Tech would not release Mayfield to transfer within the Big 12, which cost him a year of eligibility. As good as Baker has been and as bad as Tech’s defense always is, he could have his revenge and eat it, too. I’ll be in the stands for this one as a Tech grad and a Mayfield DFS owner. #sportsconflicts

As for Dungey, he has been on a roll lately with two passing touchdowns and a rushing touchdown in each of his last two games. That’s good for an average of 22.44 fantasy points in those two games. With a price tag of just $5,000, another 20-point performance would more than return value. The problems are that he doesn’t have much of a track record, and he has a tough matchup against Pitt. The Panthers rate 35th in total defense and second in passing defense, which is part of why Syracuse has the seventh lowest implied total of the state. His last two games have been against South Florida and Virginia, who do not have good defensive ratings. If you want to go cheap, this is who I’d do it with. But it’s a gamble.

Good luck picking a running back this week. And this time I am saying it because there are a lack of good options. Derrick Henry is really the only big money, reliable running back of the slate, but there’s no way you can afford him if you pay up for two quarterbacks. Plus, his matchup with Tennessee is below average. Instead, I think you’ll have to go down the list a bit, and Shock Linwood is a good option if you can afford it. It just seems wrong not to have exposure to Baylor’s offense, and Linwood is a good way to get it if you pass on Russell.

The Michigan State Spartans have one of the best matchups on the ground this week against an Indiana team that rates 107th in total defense and 97th in rushing defense. With Madre London expected to miss a second straight game, LJ Scott and Gerald Holmes have value potential. They didn’t do a ton against Michigan last week, but there’s no shame in that as the Wolverines rate first in the country in total defense. They should fare much better this week as a healthy favorite in a good matchup. They split carries about evenly last week, but Scott has out-touched Holmes significantly this year and has two touchdowns in each of the last three games. If for whatever reason you can afford two expensive running backs, I’d pair Scott and Linwood. But if you spend on two quarterbacks, Holmes can provide some much needed salary relief.

Going back to the Sooners, last week Joe Mixon out-touched Samaje Perine for the first time this season. Because my girlfriend is an OU grad, I’ve watched more OU football than any other team, and it’s not a stretch to say Mixon is a better fit for OU’s new spread offense than Perine is. Mixon has about twice as many receptions as Perine this year, and it’s an added bonus that he’s cheaper on DK. There may not be a ton of upside, but Mixon is a nice value play.

Rounding out the list are Saquon Barkley and Terry Swanson. Barkley has been very efficient this season averaging 8.3 yards per carry. The problem is that he’s been held out with an ankle injury previously, which adds some risk to playing him. But he showed no ill effects of the ankle injury last week with 26 carries for 194 yards. His matchup with Maryland isn’t a great one, but it’s above average and by no means prohibitive. As for Swanson, he too has been very efficient, averaging 7.9 yards per carry. But he has serious volume concerns as Kareem Hunt and Damion Jones-Moore got more touches than he did last week. His matchup with UMass is a very good one, but he’s a gamble to get enough work.

It’s certainly not required to stack Ward with a Houston receiver as the QB has 14 rushing touchdowns compared to nine passing touchdowns. But even though Ayers may not have crazy upside, he sets a very nice floor. He has at least six receptions in every game this season and has only failed to clear 75 receiving yards once. He averages 7.5 receptions and 93.5 yards per game.

The other stack candidates here are Sterling Shepard and Corey Coleman. I hardly think you can afford Russell, much less Russell and Coleman. Coleman is putting up the best half season I’ve seen since Michael Crabtree’s freshman season, and Coleman seems primed to keep it going in the second half. But with a lack of value at QB, I’m not sure how you fit him in. As for Shepard, he’s a great upside play, but he’s a bit inconsistent if that scares you.

Gabe Marks is here as your chance to get exposure to Falk if you’d like. Marks leads the Cougars in targets, receptions, yardage and is tied for the team lead in receiving touchdowns. The matchup is great, and I have a hard time imagining he doesn’t deliver. It’s just a matter of having space for him.

Your cheap options are Nate Phillips and Tre’Quan Smith, who you may have to roster for salary relief. Multiple Arizona receivers are good salary relief options, but Phillips is second on the team in targets and a bit cheaper than the guy who leads the team in targets, Cayleb Jones. Phillips had his best game of the season last week with six receptions for 106 yards in Colorado. Arizona has the third highest implied total of the slate, and Phillips is a good cheap way to get some exposure to them. As for Smith, the freshman has almost twice as many targets as any other UCF receiver. His team is awful, and he has been a no-show the last three weeks. But he gets looks and has flashed some upside, so he could return value.