Today, we are going to look at some favorable betting lines and matchups for Week 4 of the NFL season. The order of picks below mirror my confidence in those picks. I’m most confident in the Bears and the least confident in the Cardinals.

When I first saw this line I thought it was a misprint.  The Bears defense was dominant against a porous Steelers offensive line last week. True, they do lose Henry Melton and may be without Charles Tillman again, but they have enough talent on the defensive side of the ball to stay with the dangerous Lions’ offense. The one spot where the Bears’ defense has struggled is against number one WRs as Jerome Simpson, A.J. Green and Antonio Brown all had 140 yards or more against this defense. So, expect a huge day from Calvin Johnson, but what else is new.

The Lions have jumped out to a 2-1 record against three of the poorer teams in the NFL. This game will be their first true test. They have all of the offensive weapons to beat anyone in the league, but their defense still hasn’t been tested. And when it has been tested, it has been shown to be weak against the run. The Bears would be more than happy to control the clock with Matt Forte and Michael Bush on the ground and a throw or two from Jay Cutler to Brandon Marshall. This

The Bears have a solid chance of winning outright so take them with the points.

This is a game to watch the line on. At 8 points, I would still play it. However, if the line moves to 8.5 or more I would jump on it as soon as you can. The Colts are coming off an impressive 27-7 win over the 49ers last week and the Jags are coming off an awful blowout at the hands of the Seahawks.  However, the Colts were only up 13-7 midway through the fourth quarter. It was hardly a dominant performance against a Niners team that looked confused.

The Colts enter without Ahmad Bradshaw (who averaged 5.0 YPC in the big win last week) so they will rely on Trent Richardson and his career 3.5 YPC (2.7 YPC in last week’s win) average against the worst run defense through three weeks.  It will be interesting to see if Richardson can take advantage of the poor defense.

However, remember that the Jags have a good pass defense and their offense, while poor, has faced two of the better defenses (Kansas City and Seattle) in the league so far.

The Jags should cover the spread this week and are my choice.

The Bucs will probably be without their two top WRs in Mike Williams and Vincent Jackson and they are starting rookie third rounder Mike Glennon at QB. To say that the Bucs will be a one-dimensional on offense is an understatement.  Sadly, they still have Greg Schiano as a head coach and that is clearly a detriment to success.

The Cardinals have injury issues of their own with much of their linebacking corps injured. However, they have the more experienced QB in Carson Palmer and will have a healthy Larry Fitzgerald back.

This is more of a hunch play, but the Bucs are heading in the wrong direction and the removal of Josh Freeman as QB won’t solve their problems.

Take the Cardinals and the points.

Take the New York Jets to cover the 3.5 points they are getting against the Tennessee Titans. The Jets defense is too good and Jake Locker is too bad to make this anything more than a field goal game. 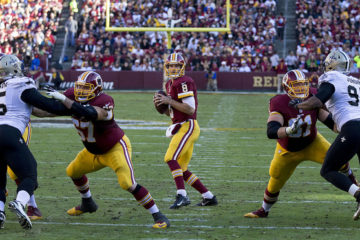