Good Morning hockey fans! Last night was the moment we have all been waiting for; opening night, and it didn’t disappoint. All three games went down to the wire and were settled by one-goal margins (if you don’t count Marian Hossa’ empty net goal for Chicago).

Let’s begin by discussing what’s new in 2013-2014. For starters, hybrid icing was introduced as a new rule. It is best described as a mixture of no-touch icing and touch icing. The rule is being implemented in an effort to reduce violent collisions that occur in races to beat out an icing call. Specifically, the situations when the defenseman is clearly going to win the race against the incoming opposing play. A specific example is this play involving Carolina Hurricanes defenseman Joni Pitkanen. Don’t worry, the injury won’t make you queasy, rather it will make you wince in pain. Pitkanen was carried off on a stretcher (not shown in the clip I chose).

Next, it appears that the goalie pad rule change will play a huge role in scoring output this year (at least it did last night!) Last night was filled with poor defensive teams like Edmonton, Winnipeg, and Washington so the numbers are slightly skewed, but last nights’ three games, gave us an average of 4.0 goals per team. Contrast this with last year’s average goals per game total of about 2.58 and it’s a massive disparity.

While it can’t be stressed enough how small the sample size is for this goalie data, the off-season rule changes make this a situation to monitor seriously. For example, in fantasy, having an elite goaltender may prove to be the most crucial element in whether your team brings home the league championship.

Let’s break them into tiers; separating by skill, consistency and accounting for risk factors like possible severe regression.

Braden Holtby– Washington Capitals (Upside to move up a tier)

The Rest- (You want these guys as back-ups at best)

Given the risk of the goaltending position this year with the new pads, ideally, you want a goalie from Tier-1 and a goalie from any other Top-4 tier, or get either two Tier-2 goalies or get a Tier-2 goalie and a Tier-3 goalie. We will be monitoring the goalie position throughout the year with meticulous comprehensive coverage in our “Five-Hole Friday” column. We will review the goalie position for the week, specifically highlighting goalies allowing too many five-hole goals (since five-hole goals are going to have the highest rate of increase thanks to the new pads).

The Scoop: The unfortunate incident during a fight between George Parros (Montreal) and Colton Orr (Toronto), seen here will be the story from this game that fans remember. Our prayers are with George Parros, as he sustained a concussion from the fall. Parros thanked his fans after the game via twitter. While this incident is sure to ignite yet another media firestorm about the merits of fighting in hockey, I’ll make quick work of it by saying this…..

Hockey is a physical sport and injuries can occur. I’ve played for 14 years, and while my leagues are and were in no way subject to the physicality of the NHL, I know that I risk injury every time I play. My father has played even longer and has a long history of concussions. He still plays because he can’t stay away. Hockey players know the risks, we choose to ignore them for the love of the game.

Also, fans that want fighting out of the game don’t understand that it is needed as a way of players policing themselves. Having “tough guys”, (goon’s not included), that will drop the gloves to defend a teammate or in an attempt to swing the momentum in a game, are important parts of the sport. The reason for this is that if there was no fighting and no self-policing by the players, goons like Matt Cooke doing things like this (stepping on Erik Karlsson’s Achilles intentionally with his skate), and elbowing Ryan McDonagh. If fighting was taken out of the game, how else could Cooke have gotten what he has always deserved? – this beat-down from Shawn Thornton, or better yet, when Cooke was running around the entire game trying to target then “Thrashers” forward Evander Kane, how could Kane have been able to respond so brilliantly to the obnoxious, dirty, cheap-shotting little pest? Fighting is here to stay; period. Unfortunate things happen, and goons like Cooke have no place in the game, but as long as they are in the game, we need tough guys like Parros, Islanders forward Cal Clutterbuck, Bruins forward Shawn Thornton and others in order to keep them in line and keep the star players out of harms’ way from their (the goons) targeting.

Climbing down from my soap box now; I’ll continue.

The shining star from this game was Montreal forward Lars Eller. Eller potted two goals and assisted on another, as he had in his hand in each goal that Montreal scored. The problem is that Eller’s efforts were outdone by the continued problem for the Canadiens: penalties. Montreal was charged with the third most minor penalties in the NHL last season. They continued that trend last night as they gave Toronto seven power-play opportunities. While Toronto scored on just one of them, (the first goal of the game) the margin of victory for the Leafs was one goal. Montreal also allowed a short-handed goal as well to Tyler Bozak.

The Scoop: Like the Montreal game, the big story in this one was generated by the performance of a player on the losing team. Washington center Mikhail Grabovski, made a lot of noise in his Capitals debut by recording a hat-trick including two power-play goals in the third period to tie the game and then take the lead. The Capitals scorching hot power-play success (3-for-6 on PP) has carried over to this season after they ranked number one in the stat last year. Unfortunately, so has their porous penalty-kill. Washington had the fourth worst penalty-kill last season, and seeing positioning like this leaves little doubt as to why.

The first goal of the game off the re-direction by Blackhawk Brandon Bollig is the topic of our acute analysis angle today. 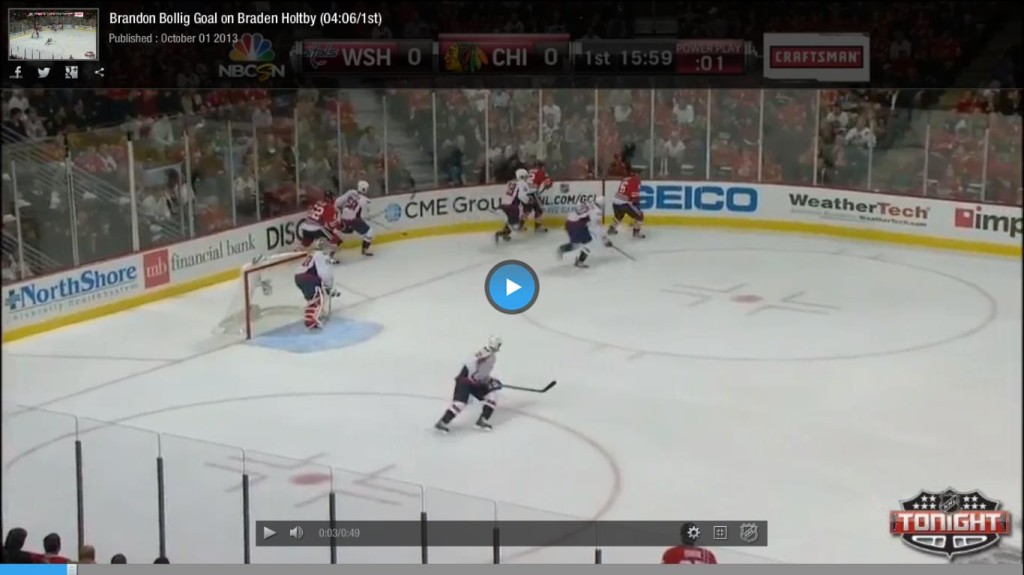 The Capitals are one second away from being back at full strength. Notice how bunched up they are against the boards with the highest positioned player along the boards (#20 Troy Brouwer) completely out of position. Brouwer needs to be higher along the boards so he can affect the obvious shot that is coming from Chicago point-man Niklas Hjalmarsson (not pictured). Brouwer adjusts but not in time and Hjalmarsson has an easy shooting lane. Combine that with the feeble attempt of Karl Alzner (#58, seen left of goaltender Holtby) to tie up eventual goal-scorer Bollig in front of the net, and it’s an easy goal to put the Blackhawks ahead 1-0.

Watch the play unravel for yourself here. Washington can be fortunate they only lost 6-4 after getting out-shot 18-to-6 in the second period and only yielding one goal while scoring one of their own in the frame. The defending Stanley Cup Champion Hawks treated their fans to a great showing on banner night.

The Scoop: This meeting between the two former division rivals was their first in 17 years and it did not disappoint. The game was exciting early as the Oilers got on the board first as Luke Gadzic potted his first career NHL goal two minutes and 23 seconds into the game. Following a penalty to Oiler defenseman Jeff Petry, the Jets responded quickly with a beautiful goal by rookie center and fantasy sleeper Mark Scheifele just one minute and four seconds after Edmonton made it 1-0. After a Boyd Gordon goal gave the Jets a 2-1 lead, Edmonton scored three straight to lead 4-2 late in the second period. Newly acquired winger Michael Frolik scored the first of his two goals late in the second before scoring the eventual game-winner at 14:48 of the third period. Standout players from the game included Frolik and Jets rookie defenseman Jacob Trouba who scored the game-tying goal and assisted on Frolik’s first goal, all while also leading the Jets in ice-time with 25 minutes. Trouba racked up most of his ice-time on special teams as he was on the ice during the penalty-kill for four minutes and 41 seconds and the power-play for two minutes and 59 seconds. Trouba skated on the top penalty-kill unit with defenseman Mark Stuart and on the second power-play unit with Zach Bogosian.

Would You Like To Be A Fantasy Football Millionaire?