Good morning folks. Five teams kicked off their 2013-2014 season today, giving us all scoring results which allow us to scale back the panic button on the sudden scoring increase.

The Scoop: This game was full of sluggish effort from both teams. Toronto was coming off a 4-3 victory on the road last night against the Montreal Canadiens and the Flyers, well, they really didn’t have an excuse. The first goal of the game came off the stick of Flyer center Brayden Schenn on the power-play. This goal is the subject of today’s acute analysis angle.

It’s a damn good thing that Leafs center Dave Bolland scored two goals later in the game because he was to blame for the Flyers first and only goal of the game.

The Play: With 19.3 seconds left in the first period, Philadelphia defenseman Mark Streit brings up the puck as the Flyers break out of the zone. The Maple Leafs, on the penalty-kill, are yielding the neutral zone to the Flyers and instead attempt to hold the blue-line.

FREEZE: With 17.3 seconds left Streit has the puck with the eventual goal scorer , Schenn (#10, pictured near side against the boards) 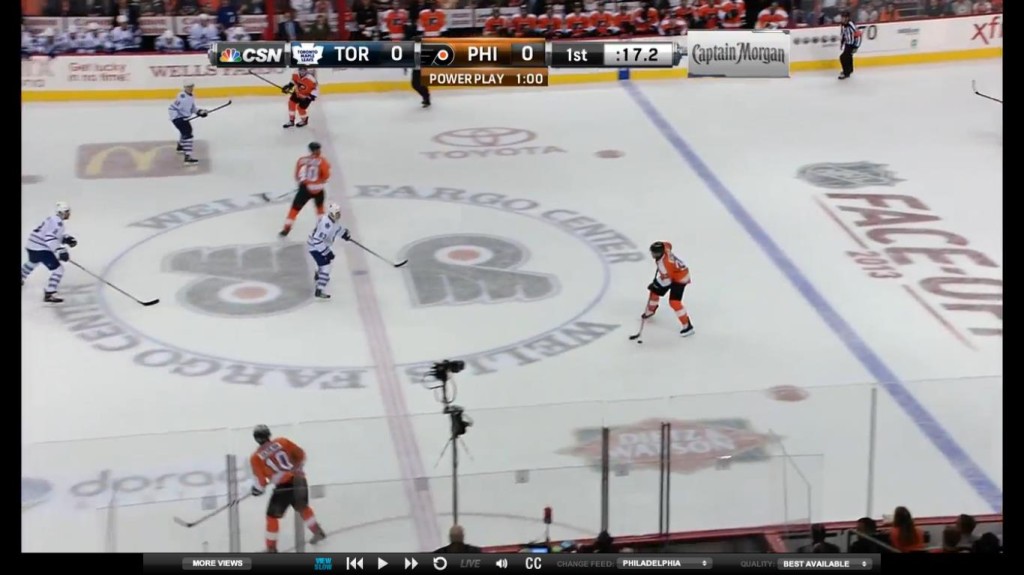 Pictured here for the Leafs are three of the four penalty killers. They are Bolland (center ice), Mason Raymond (McDonalds ad), and defenseman Mark Fraser. The defenseman not pictured is Cody Franson. All four Leafs players are staring right at the puck carrier Mark Streit.

It gets even worse because 1.5 seconds later, Streit has the puck at the blue line with his teammates waiting for him to dump it in. The four Leafs, (now all pictured in photo below) are still staring right at Streit.

FREEZE: Remember, Schenn (#10)is the eventual goal scorer thanks to a Streit dump-in. But Toronto’s defense here is so atrocious, that Streit even has another option if he wanted (and had his head up on the play). Matt Read (between blue line and Flyers logo pictured center), could easily streak down the middle,  between Raymond and Fraser and receive a Streit pass for a pseudo-breakaway. 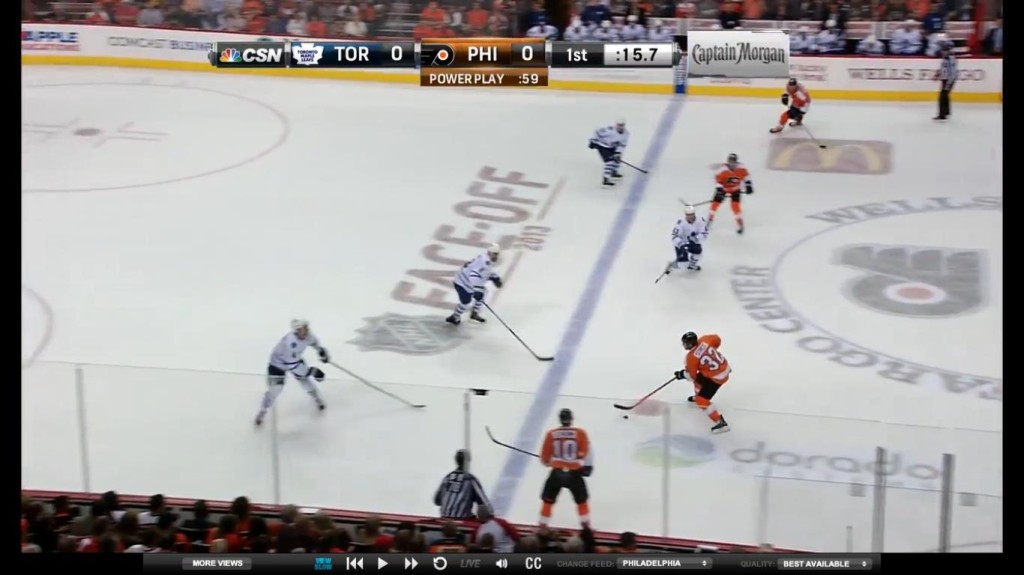 Streit gains the zone and dumps the puck in as Schenn hangs back at the blue-line for a couple seconds to watch the Leafs defenders react to the dump-in. 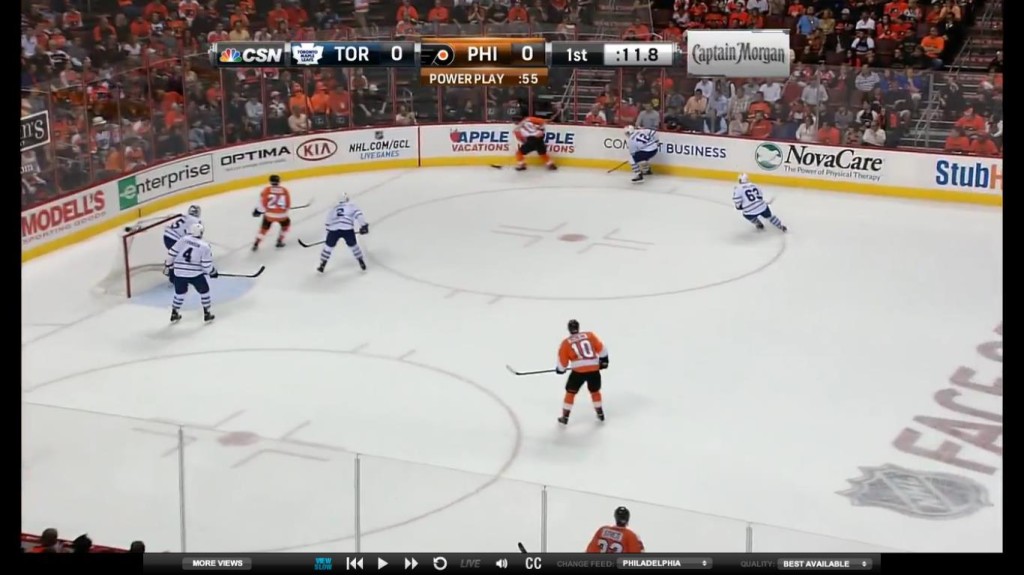 There are now 11.8 seconds on the clock and Franson, Fraser and Raymond, despite their bad play at the blue-line, have all gotten into position for their box. Bolland is unfortunately playing lone ranger and due to the fact that all of them were watching the puck when it come into the zone, Schenn ends up going totally unaccounted for, leaving him wide open in the middle of the ice. The rest of the play just continues to go south for Toronto as Flyer center Vincent Lecavalier (#40, shown with the puck), circles around the back of the net with Dave Bolland still staring down the puck carrier and paying Brayden Schenn no attention until the very last second. Schenn receives the pass and pots a goal in the upper left corner.

The rest of the game was typical Flyers hockey, as the first goal for Toronto came off a fortunate bounce after a great save by goaltender Steve Mason. Toronto superstar Phil Kessel potted the goal off the rebound, and the Flyers announcers dubbed it “luck”. Well that may be so, but he failed to mention the neutral zone turnover by Maxime Talbot that gave the Leafs the puck in the first place. The other notable Leafs goal was created by a hustling Nikolai Kulemin who beat Mark Streit to the corner, fed the puck to Joffrey Lupul who fed it to Bolland for an easy goal.

The Scoop: This game was fairly boring to watch after the first period when Detroit went up 2-0. However, the two goals scored by Detroit were absolutely gorgeous. The first goal was batted out of mid-air by Mikkael Samuelsson after an absolutely gorgeous feed from Cory Emmerton. The second goal of the period was scored by none other than superstar Pavel Datsyuk. Datsyuk’s goal was a back-hander that caught goaltender Ryan Miller completely off guard.

The Wings were fortunate they didn’t lose this game, as they totally outplayed a woeful Sabres, but thanks to complacency and letting off the gas during the second period, the Sabres would make it a one-goal game in the third off a lucky bounce. The benefactor of that lucky bounce was 28-year-old Sabres forward Zemgus Girgensons from Latvia. Girgensons was a first round pick in the 2012 NHL Draft. The goal was the first of his NHL career. Late pressure by the Sabres in the third period gave Wings fans a scare, but ultimately the much better team won.

New Head Coach Patrick Roy got his coaching career off to an excellent start as his young Avs team completely dismantled last year’s regular season Western Conference Champion Anaheim Ducks. Worth noting is that Bruce Boudreau’s squad was 18-2 last year when scoring first but just 12-10 otherwise. Another notable debut for the Colorado Avalanche was number one overall pick Nathan MacKinnon. MacKinnon centered for wingers Jamie McGinn (who scored twice) and P.A. Parenteau. The trio racked up the most even strength ice time for any forward line combination. Of the 60 minutes of ice time, 21.62% of that ice time was allocated to that trio of forwards while playing 5-on-5. MacKinnon also spent one shift on the penalty-kill. He finished with two assists, a plus-1 plus/minus rating, two penalty minutes, five shots and 15:31 of ice-time. Expect more ice time for the 18-year-old going forward as he may join the power-play as well if he keeps this up.  Anaheim netminder Viktor Fasth took the loss, and while he was certainly not at his best, the Ducks defense was god awful.

The most surprising note from this game was that Avs winger Steve Downie was skating on the first line with Ryan O’ Reilly and Matt Duchene. This line persisted on the power-play as well, as Downie racked up two power-play points (one goal and one assist). Downie is owned in just 89.3 percent of leagues, so if he’s un-owned in your league, pounce.