Good morning hockey fans! Saturday is the best day of the week, as there is usually plenty of action and last night there were 11 games!

The Scoop: The Boston Bruins played host to the Wings, fresh off a hard-fought road win in Carolina the night before. The Wings were clearly tired. The Bruins got on the board first, only fifteen seconds  into the power-play after Niklas Kronwall went off for holding. The goal was caused by an out-of-position Johan Franzen skating all over the ice pressuring everyone with the puck. Normally, that’s a good thing, but his abandonment of the high slot left a shooting lane for Boston defender Torey Krug to blast one by Jimmy Howard. With 3:11 to go in the first period, Henrik Zetterberg streaked down the left wing boards and was in perfect position to capitalize on an enormous rebound surrendered by Tuukka Rask off a Justin Abdelkader shot to make it 1-1. After that it was all Bruins as they capitalized on the exhausted Red Wings.

The Scoop: Montreal dominated this game as they out-shot the Flyers 34-22 and received nine power-plays. The Flyers played their typical game by recording 13 giveaways. The first goal of the game was the result of excellent hustle by center Tomas Plekanec, hustling hard to the boards after winning a face-off to the left where nobody was. He passed it to Rene Bourque who circled behind the net and finessed a gorgeous pass to the front of the net where Brian Gionta was waiting. Vincent Lecavalier pocketed the Flyers lone goal of the game on the power-play in the third period to bring the deficit to 3-1. It was Lecavalier’s first goal of his career in anything but a Tampa Bay Lightning uniform. Additionally, Lars Eller pocketed his third goal of the season and now leads the Canadiens with five points in two games.

The Scoop: After losing to Calgary the night before, Columbus was in a position to record a much needed win. The Islanders came into this game fresh off a defeat of the New Jersey Devils in a shootout. The Islanders kicked off the action in the second period by getting on the board first. Defenseman Lubomir Visnovsky rifled a shot home from the point on the power-play that may have been tipped in front by a Blue Jackets player the puck had weird spin on it going into the net. Later in the second period Matt Moulson put the Islanders up 2-0 thanks to an absolutely gorgeous no-look, backhand pass by John Tavares. Columbus got on the board in the third period as Mark Letestu rifled home a wrist shot past Evgeni Nabokov on the power-play to make it 2-1. The second goal Nabokov game up is undoubtedly one he would like to have back. Nick Foligno crashed the net for Columbus and poked a loose puck near Nabokov into the back of the net. Then, in the shootout it was Cam Atkinson who played hero as he broke a 1-1 shootout tie in the 4th leg to give the Blue Jackets the victory.

The Scoop: The Blackhawks totally dominated the first two periods of play, as they had a 25-6 shot advantage heading into the third period. The Lightning, incredibly, executed on their two of their only scoring chances as Martin St. Louis rifled a gorgeous backhand shot off a huge Corey Crawford rebound past the stunned goaltender to pull the Lightning within one goal at the 10:08 mark of the third. Less than two minutes later, Teddy Purcell stroke home a one-timer on the power-play off a beautiful short pass by Marty St. Louis to tie the game at two.  The Hawks faithful were stunned as they suddenly saw a game that was seemingly a lock to win, now going to overtime. Ben Bishop, the Lightning goaltender, was absolutely fabulous throughout the game and into overtime and the Bolts won it 3-2 in a stunning come-from-behind fashion.

The Scoop: Mason Raymond got the scoring going on what was an excellent shift for him and linemates Troy Bodie and Dave Bolland. An excellent breakout and tip-toe passing combined as factors to help the Leafs take a 1-0 lead.   Kyle Turris and Cory Conacher responded with two straight goals for Ottawa before Nazem Kadri closed out the first period scoring from literally the exact same spot as Raymond did earlier (low left circle).

The third goal for Ottawa is our play of the game for the acute analysis angle segment.

The Play: There is 9:22 left in the second period and the game is tied 2-2. Ottawa has the puck in Toronto’s zone. 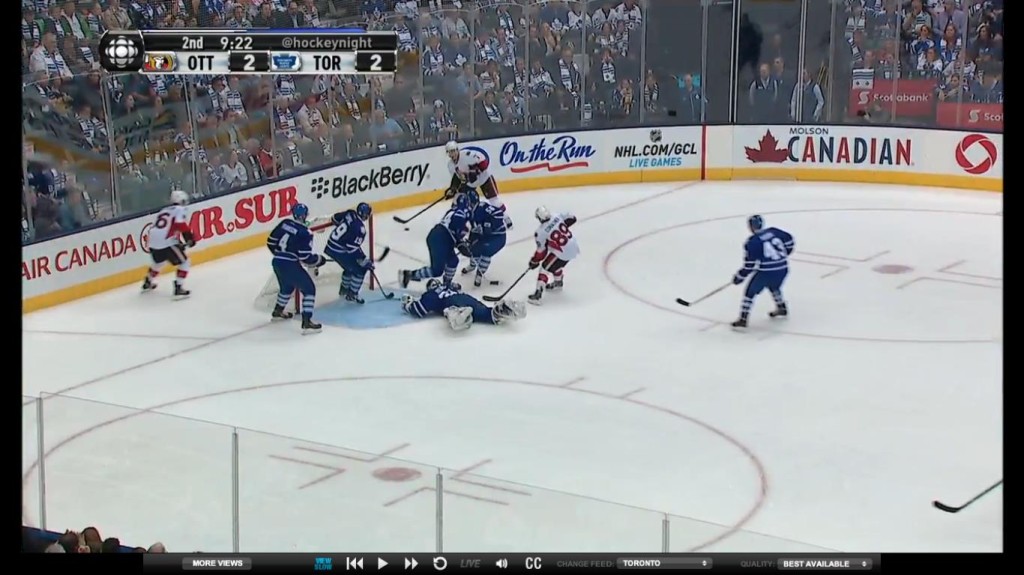 It took Nazem Kadri way too long to get back and as a result, he’s completely oblivious to the situation at hand. See the stick coming into the picture on the right hand side? That’s the stick of eventual goal-scorer Jared Cowen. Nobody pays him any attention and instead of picking up the point man, Kadri is out of position and Bernier is sprawled across the ice after trying to reach for a rebound. This line, Cody Franson, Nazem Kadri, Joffrey Lupul, and Morgan Rielly were all minus-3 on the night, and it’s no wonder with positioning like this. Toronto also had 33 giveaways on the night.

Despite all this, Toronto pulled it out in a shootout thanks to the excellent efforts of Mason Raymond who contributed three points.

The Scoop: The Penguins cruised to victory in this one as Marc-Andre Fleury had to face just 21 shots. Buffalo Sabres backup goalie Jhonas Enroth got the nod in this one as Ryan Miller was banged up. Enroth was good considering the circumstances, facing 35 shots en-route to a respectable .912 save percentage with zero defense from the Sabres.

The Scoop: It’s fair to say that goaltender Tim Thomas didn’t exactly play very well. Thomas allowed five goals on 28 shots and was pulled to start the third period. That’s when things really got out of hand because St. Louis scored two more times very early in the period. After that there were tons of penalties dished out as eight players were ejected, and a fight broke out throughout three separate incidents

The Scoop: The Capitals only scored one goal but once again it was on the power-play. Alex Ovechkin potted his fourth goal of the season from an extremely tough angle. As usual, Mike Green hand his hand in it as he got an assist on the play. With 11:59 left in the first period Erik Cole received a gorgeous pass from Tyler Seguin and Cole rifled it into the net to tie the game at 1-1. Next it was Dallas youngster Alex Chiasson, who scored for the second straight game. The Stars played excellent defense throughout the rest of the game.

The Scoop: The Minnesota Wild dominated with puck possession at the Xcel Energy Center in this game, as they won 47 face-offs compared to just 26 for Anaheim. Additionally, Minnesota was 2-for-4 on the power-play. Zach Parise scored two goals for the Wild, but his efforts and those of Mikko Koivu (18-for-28, 64% on face-offs) and Kyle Brodziak (14-for-21, 67%)  were not enough. For Anaheim, the scoring was well spread out as all four goals were scored by different players – Saku Koivu, Nick Bonino, Jakub Silfverberg and Mathieu Perrault had the game-winner in overtime. Jonas Hiller got the win for the Ducks as he stopped 26 of 27 even strength shots and yielded 2 goals on 4 shots on the power-play.