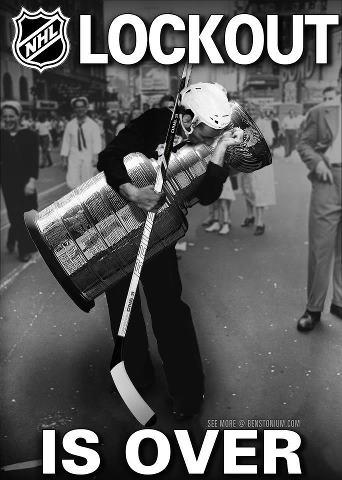 Given the quirky creativeness of myself and my editors that my readers have come to expect, the original plan was to somehow integrate this title with that of the current Tarantino epic in a Photoshop extravaganza. But given the sensitive subject matter, we’ll just say the movie was great, and go with the logo photo instead.

It’s January at the end of the current seven-year cycle here in the Gary Bettman era, so that can only mean one thing: hockey has finally returned to us.

Yes, even the Mayan calendar could have accurately predicted yet another work stoppage for the one professional sports league that can ill afford it. The topic of who’s to blame has been the fodder of every hockey blog in the world for the past three months. So rather than harp on that, we’ll just give credit where it’s due.

No really Gary, congratulations for getting through your professional sports commissioners’ record FOURTH WORK STOPPAGE! For those of you keeping score at home, Gary (I refuse to recognize him as the Commissioner of my league, nor will I give him the respect of the title Mr.) has presided over three lockouts; October-January 94-95, the entire 2004-2005 season, and present, plus a 10-day strike in 1992. But again, I absolutely refuse to dwell on assigning blame.

So as the teams get back to work, the NHL returns to being the cult classic it worked so hard over the past seven years to break out of. While the loyal fan bases will not suffer, evident in the Bruins, Flyers and Rangers playing their home openers this past weekend to their usual sold-out rabid crowds, two questions remain: How will the small market teams fare, and will Joe American sports fan tune in.

The second part is easy. Joe is gone. The fan-building impact due to the addition of the shootout (sorry so-called purists, I’m still a huge fan of this regular-season tie-breaking skills completion,) the Winter Classic, and the ultra-thrilling, yet ultimately crushing gold medal game, which brought the fringe sports fans into the mix, has completely evaporated, and sent them back to the NBA, post-Tiger-dominated golf, European soccer, and other sports that I’ll never understand the appeal of. On one hand, I enjoy the appeal of hockey fans being a unique, loyal, separate group of sports fans that others will never fully comprehend. But on the other, I not only will never understand why hockey can’t make it big it in this country, but would wish that it would, because it if made baseball or NBA dollars, maybe we wouldn’t be in this situation every seven years.

After all, hockey is fast-paced, action-packed, intense, on the edge of your seat speed, grace and puck movement. Scoring is up, and fighting is legal. If you’re one of those who won’t watch it because of the fighting, then we not need you anyway. I’ve never heard anyone say, “yeah, the baseball game was great, but that bench-clearing brawl ruined my day.” So why is hockey a problem? But that’s an argument for another time.

As for the small market teams, they also have their loyal fan bases, but they just do not have the sheer numbers of populations like New York, Detroit, Boston and Philadelphia. For the mainstream, teams like Carolina, Nashville and Columbus operate on a what-have-you-done-for-me-lately basis. The Hurricanes for example, are offering discounted tickets and food on college nights, military appreciation nights (which every team should have anyway,) teacher discount nights and Harris Teeter supermarket discount nights to lure fans back.

Don’t get me wrong, I would love for Madison Square Garden to have to do this, but they’re smart enough to know that they even with raising ticket prices this year (seriously they did,) they’ll be able to find 18,200 in a city of 12 million each night. Maybe Columbus is a bad example in this group. Their best player (actually only good player) in Rick Nash, has gone to Broadway, and been replaced with never quite panned out into anything useful in New York Brandon Dubinsky. So Columbus, Ohio, you are excused should you choose to stay home. But don’t be surprised should they choose not to.

So like it or not Joe America, hockey is back. Coming soon, my 6 most interesting to see how they’ll do this year preview, featuring the Rangers, Flyers, Devils, Capitals, Hurricanes and Red Wings. East Coast bias? Probably. But I have the conch, so deal with it.