Below we’ve got a discussion of the starting pitching situation as well as the best teams to use for stacks for Friday’s 14-game evening slate on DraftKings. We’ve also got projections derived from Dan Szymborski’s ZiPS projections, rankings of the top plays at each position and some sample lineups for you to consider.

If Corey Kluber ($10,600) is pitching and I’m covering the daily article here, Kluber is getting mentioned. My model clearly likes Kluber more than the DK model does as he almost always grades out as a good value play for the day along with having a solid projection.

If you remove pitchers from team hitting numbers, Kluber’s opponent today, Minnesota, has the third worst wRC+ and the seventh highest strikeout rate against right-handed pitching. Kluber took advantage of this very same matchup in his last start when he struck out 10 Twins in a complete game win. Don’t expect that from him again, but it’s not unreasonable to have him right there with Scherzer as the top projected pitcher of the day and at a much more reasonable cost than Scherzer.

I see no other value among the expensive pitchers ($9,500 plus), so I wouldn’t bother pairing Kluber with another expensive arm. There are options in the mid-price range and the bargain bin for an SP2.

In the mid-price range, Julio Teheran ($7,000) grades out as a solid value. Like Kluber, Teheran is one of those guys that my model likes more than the DK pricing model does. He’s been admittedly bad this year, so I’m not inclined to automatically go with my model here. But he has been better over his last six starts with an xFIP of 3.54 in that time frame. He’s facing the Diamondbacks who are about average against right-handed pitching with a strikeout rate a bit higher than average. They’re also getting a negative park shift away from home, so the matchup isn’t awful for Teheran. I just might prefer to spend less on a SP2 that I don’t fully trust.

J.A. Happ ($6,600) and Bartolo Colon ($6,400) are a bit cheaper that Teheran and also have good value grades, but I don’t love their matchups. They’re facing each other, so Colon will face a Pirates lineup that is second in wRC+ over the last two weeks. Pass. And Happ is a left-hander with a reverse split facing a Mets team that probably has more strong left-handed bats than right. Pass.

If you want to go super-cheap, you’ve got a couple of options in John Lamb ($5,200) and Matt Cain ($5,100). Starting with Cain, he’s similar to Teheran in that he simply hasn’t been very good this season. But he has a good matchup against a Nats team that has been cold the last couple of weeks, is below average for the season against right-handed pitching and has the seventh highest strikeout rate against right-handers. You also have to throw in the ball park factor for Cain with the game being in San Francisco. At this price point, there’s a fair amount of value potential in Cain, even if you don’t trust him.

Lamb was part of the trade that sent Johnny Cueto to Kansas City, and this will be his first career major league start. Lamb has earned his call up by posting a 2.67 ERA in over 100 innings at Triple-A this season along with solid strikeout numbers. Walks have been a bit of an issue, but that’s not atypical of a young starter with some strikeout ability. He’ll have a tough-ish matchup against the Dodgers his first time out, though LA is better against right-handed pitching than left. He’ll also get a positive park shift pitching in LA as opposed to Cincinnati. Whether you go with Lamb or Cain as a bargain play is a tough call. Do you go with the devil you know or the devil you don’t?

“Teams playing in Coors and Blue Jays” probably could have sufficed as the content of the stack options section many times this year. And Vegas has the teams playing in Coors and the Blue Jays as three of the five teams with the highest implied run totals today. While you probably want some exposure to all three in cash games, the Blue Jays are the only one of the three I could see making sense to use for a full five- or six-man stack, though I don’t know that I’d go that route today. They’re facing Ivan Nova who has a tendency to keep the ball on the ground, which can be a stack-killer. The best value Blue Jays are Edwin Encarnacion ($4,200) if he’s back in the lineup and Justin Smoak ($2,500) if he’s not.

The two teams playing in Coors today are the Padres and obviously the Rockies. For the Padres, I like their three top right-handed bats of Derek Norris, Justin Upton and Matt Kemp. Norris is the only one with a bit of value, but you can certainly make the case to pay up for Upton and Kemp with the platoon advantage in Coors Field. But like the Blue Jays, the Padres are facing a heavy ground ball pitcher as Colorado starter Yohan Flande is rocking a 64.8 percent strikeout rate in 33 2/3 innings this year. As for the Rockies, I don’t really see a ton of value with them. They’re also facing a ground ball stud as Tyson Ross has a 63.6 percent ground ball rate this season. Unlike Flande and Nova, Ross has the added bonus of being definitively good.

So if you aren’t stacking the Jays or Coors heavily, where can you go for that type of play? I’d say Tampa Bay right-handers in Texas against Martin Perez, but I’d have to point out that Perez is an extreme ground ball guy as well with a 60.7 percent ground ball rate this year. The Rays would provide more value than the Jays or the Coors teams, but I’m still not sure there’s enough to stack here. Brandon Guyer makes for an excellent punt play in the outfield if you need salary relief, and Evan Longoria and Logan Forsythe are solid plays today. But I’m having a hard time finding a big stack here. 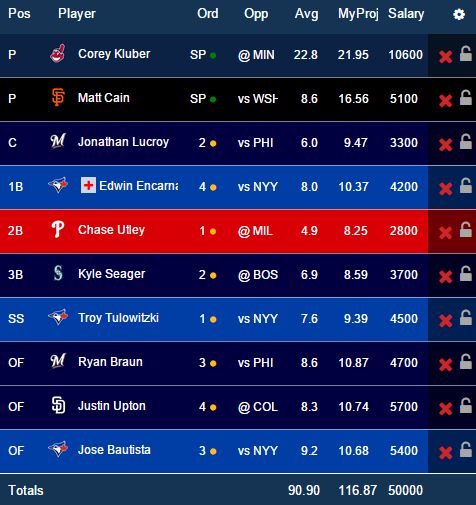 If you prefer Teheran to Cain, here’s an option for a Kluber/Teheran pairing. 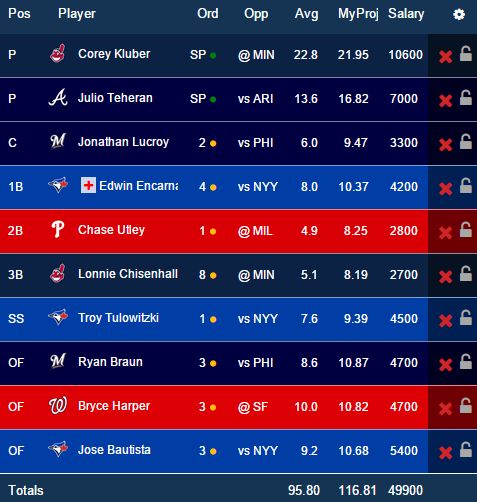