Below I’ve got a discussion of the best matchups and potential stacks of the day followed by cash game rankings for DraftKings contests. At the bottom of the post I’ve embedded my research chart for the day. Here is just a snippet of the chart I’ll use to explain what you’re looking at.

First the colors. Blue is amazeballs, green is great, yellow is good, orange is bad, red is awful and deep red is no effing way.

Make sure to check Twitter for any injury news and line changes, and check Daily Faceoff for starting goalies.

If you’ve been on Twitter at all recently, you know that the Maple Leafs are a total dumpster fire right now. If the general consensus on social media isn’t something you trust, all you need to know is that Buffalo is the only team who has allowed more goals than Toronto in the last 45 days. And no team, not even Buffalo, has allowed more Corsi against events than Toronto in that time frame, and it’s not really all that close. If it weren’t for average goaltending, Toronto would be by far the best matchup for opposing skaters. With Buffalo off today, Toronto is the best matchup of the day, and Ottawa is my favorite stack of the day despite just having an average offense.

Go with me here, but I think Toronto’s defensive weakness might be on their left side, the opposition’s right. Here’s a chart showing where all goals allowed by Toronto have come from (courtesy of somekindofninja.com).

I’m just eyeing it here, but it appears like a larger number of goals against the Maple Leafs are coming from the offense’s right side. I think the distinction is starker on the left side of the chart. For that reason, I’m going to go with forward pairs of a center and right-winger. The co-leader in points for Ottawa is right-winger Bobby Ryan ($5,700, W), so I’ll be pairing him with Mika Zibanejad ($3,900, C). That’s your cash game mini-stack from Ottawa. If you want to go Sens heavy in a GPP, I think you have to go with the first line duo of Kyle Turris ($4,800, C) and Mark Stone ($4,300, W). I also considered the third line pair of Pageua/Chiasson, but you really don’t need the value they provide (mainly Chiasson) because all the Ottawa forwards carry moderate to cheap price tags. Whether you’re using two forward pairs in a GPP or Zibanejad/Ryan in a cash game, make sure you also use Erik Karlsson ($7,600, D). He’s expensive, but again, using Ottawa forwards isn’t pricing you out of a decent lineup. The reason I’m so in on Karlsson is because of Toronto’s struggles defending the offensive right side. Here’s another chart from sportingcharts.com showing where Karlsson’s shots and goals have come from this year relative to league average. 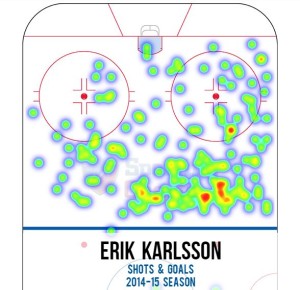 The next team I’m targeting today is the Kings against the Sharks. You could argue the Sharks are a good team to target as well because no team has a lower save percentage than the Kings over the last 45 days. But the Kings have also allowed the fewest Corsi against events in that time frame. I’ll shy away from what I consider to be the best possession team in the league no matter how bad their goaltending is. Meanwhile, San Jose is below average in terms of Corsi against events and save percentage. They’re not one of the worst teams in either statistic, but the combination of being below average in both regards makes them a good matchup.

I’ll spare you the chart, but it also appears that the Sharks allow more goals from the offense’s right side. That works out because the two guys I like the most from LA today have been playing right wing lately. That’s Jeff Carter ($4,900, C), who is being centered by Nick Shore ($2,500, C), and Justin Williams ($4,600, W), who is being centered by Anze Kopitar ($6,400, C). Williams/Kopitar is the safer play for cash games. Drew Doughty ($5,500, D) is great and plays on the right side in the offensive zone, but my pick for a defenseman is Alec Martinez ($4,100, D), who also plays on the right side as well as on the second power play unit with Williams.

And then finally I’ll be stacking Jets. Aside from Los Angeles, the Jets are the only well above average offensive team in action today. And the Jets are a fair bit better offensively than the Kings. So despite having a below average matchup against Columbus, I’m rolling with Jets. Because the Jets have been so good offensively, finding value on that team is a bit difficult. But Bryan Little ($5,400, C) and Blake Wheeler ($5,500, W) are pretty easily the best values on the team. I like them as a mini-stack for cash games. Dustin Byfuglien has been priced out of consideration, so I’d use Toby Enstrom ($3,500, D) who plays on the top power play unit with Little/Wheeler. If you want to go Jets heavy in a GPP, you can also go with Mark Scheifele ($4,600, C) and Evander Kane ($5,300, W).

Goalies with an asterisk next to their name are second on their team’s depth chart, so don’t count on them playing. Any players in bold have been confirmed as the starter for the day. And players with a line through their name will not be starting tonight. Make sure you always check Daily Faceoff for starting goalie updates in case I am unable to update the list throughout the day.

You can download the research chart from this Google Sheet page here.