There are a few spots where analysis and emotion collide. There is probably no place where this collision is more violent than in center field. There are those that will fiercely cling to the notion that Ty Cobb is not only the best center fielder of all time, but the best player of all-time. The adherence to this notion comes from the fact that he mastered the art of what became known as “inside baseball.” That just happened to be the world without the home run.

This was as opposed to the world of Babe Ruth. They wanted to give Cobb more credit for perfecting the existing game than creating a new one. The supposition was that Cobb would have adapted if he wanted to, but Ruth wouldn’t have thrived in the Dead Ball Era playing the way Cobb played. That extends to Cobb’s primary competition in Willie Mays.

The Hall of Fame Index Part II addresses this debate some, but the primary thrust was to see who was fit for the Hall of Fame. Here we take a look at this debate and the debate between others in the top five. We start by reiterating that we are looking for dominance and not greatness. That might seem like the same thing, but one can be measured. The other really can’t.

DiMaggio’s numbers aren’t his real numbers. However, in order to put him into the top five we needed to make an adjustment for the seasons he lost serving his country in World War II. We seem to be doing this selectively. We could have added to Ted Williams in the left fielders article. However, those missing three seasons likely didn’t change his place in history. They definitely have a more dramatic impact on DiMaggio.

The methodology is the same as we have used before. We looked at the three seasons before and after his missed seasons and approximated what he would have done by splitting the difference. The changes to the career numbers is probably the most staggering. We didn’t change his peak value even though we could have.

Of course, these numbers are only the beginning. It’s also quite possible that DiMaggio surpasses 500 doubles, 150 triples, and 1000 walks in his career as well. This is one of the reasons why we never leave it to career value alone. Cobb looks a little better than Mays in that department as well. Career value never tells the whole story.

Mays be the most valuable two way player in the history of the sport. As we will see, Cobb simply couldn’t match his defensive value. There are those that will argue that he was superior to Mays as a base runner in addition to being a better hitter. Of course, this depends largely on anecdotal evidence and not necessarily empirical evidence. The Rbaser stat is based on empirical evidence. Often the threat of taking the extra base cannot be measured. Cobb ran the bases with a reckless abandon that might have created mistakes by his opposition. We can woulda coulda shoulda that one to death.

DiMaggio’s numbers weren’t altered and maybe should have been. There is no telling if the drop off after World War II was due to natural aging or the rust of missing three consecutive seasons. Still, one can hardly deny that those three missing seasons would have likely been better than the next three. Replace some of those seasons with three additional good seasons and he would have closed some of the peak value gap.

In the book, we usually showed the offensive numbers to help explain how the index arrived at the value that it did. In this case, it helps demonstrate why DiMaggio was included in the top five. We haven’t even gotten to peak value offense and we see that he is in a tight grouping with the bottom three guys. Obviously, Mantle and Cobb throw themselves a little above that. With the exception of OPS+ we see that Cobb is slightly better, but we would need to look at peak value offense.

Keep in mind that wOBA is not adjusted for the era the guys play in. This is one spot where Cobb and Speaker have a built in adjustment given their time in the Dead Ball Era. They are likely better than what the numbers show. However, we have to note how close all of these players are in all of the categories. We haven’t seen a distribution this tight while going over each position.

Again, DiMaggio shows he belongs in spite of the fact that three prime seasons were stolen from him. His numbers here might have been slightly better with three uninterrupted seasons. However, that’s the biggest news from the table.

Is Mays the most valuable fielding center fielder of all-time? I actually tend to doubt that, but an argument could be made. I would tend to look at guys like Andruw Jones, but defensive metrics can be slippery. What cannot be in doubt is the difference here. Cobb was average. There is no shame in being average in any facet of the game. However, the difference between Cobb in Mays with the glove is startling.

Heck, Speaker had a peerless reputation with the glove and the difference between Mays and Speaker is overwhelming in some categories. Simply put, the argument for Mays as the most valuable player in center field and on the whole diamond is predicated on this right here. No one could claim he was the best hitter of all-time or even at his position. Some might claim he was the best fielder at his position, but some would not. What can’t be argued is the combination of value.

Focus on Mays and Cobb for long enough and you miss some of the other comparisons. I’ve written about the debate between Mantle and Mays before, but the interplay between DiMaggio and Mantle is far more fascinating. This is especially true when we insert those three missing seasons for DiMaggio. Their careers overlapped and would have been roughly the same length with those missing seasons. Both were successful in the playoffs and beloved in New York.

Focusing on the top bill often overlooks the more interesting comparisons when we run these top five lists. At most positions, there is little drama as to who is the top player, so the under cards are more interesting. When we start breaking down postseason performance we see how interesting a DiMaggio vs. Mantle debate becomes.

Perception is reality. The Yankees have been the most successful team in the history of team sports. Both Mantle and DiMaggio seemed to live in the World Series. The Mantle Yankees were a little more successful than the DiMaggio Yankees, but that plays into perception. Was it the fault of DiMaggio? Was Mantle simply more clutch? There are any number of factors that could play into this comparison without involving either guy?

The American League in Mantle’s time might not have been quite as good. DiMaggio’s Yankees might not have been quite as good after World War II as Mantle’s Yankees were. Still, it is hard to deny that Mantle’s numbers are better here. Mantle has more home runs in the World Series than any player in history. That of course includes Reggie Jackson. Now, how does that affect all-time rankings? Should he vault into third place? We can look at the BWAR MVP points to help us with that.

We adjusted DiMaggio’s numbers again to include those three missing seasons. He still doesn’t quite get there, but he is in the neighborhood with the other four. We see that when we compare him with the other four in terms of hitting, fielding, and MVP points he ends up being closer to them than any other center fielder in history.

Now, whether one chooses Mays or Cobb for the top spot is not really my immediate concern. I simply put the numbers out and let everyone choose for themselves. Usually, this kind of debate comes down to personal preference. There may never be a guy that comes into the game with the natural athletic ability Mays had. There may never be a player that gets more out of the athletic ability he had than Cobb. 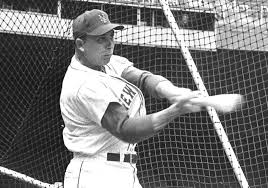