As we continue our journey through Allen Barra’s Clearing the Baseswe would like to remind everyone that it was published in 2002. The Hall of Fame Index Part IIwas published this March. Obviously one is going to have more up to date information than the other. This is important with today’s debate as Barra argued that Juan Marichal was a better overall pitcher than Bob Gibson.

As per usual, this was based on the best information of the time. This included wins, winning percentage, and ERA. However, in between we have learned a great deal about defense independent pitching statistics. Voros McCracken first put this out in 1999, but in 2002 it was still in its infancy.

So, Gibson pitched more innings per start, struck out more hitters, and gave up fewer home runs. Marichal had impeccable control and that certainly gave him the better strikeout to walk ratio, but missing bats, giving up fewer home runs, and going deeper into games gave him an advantage in value that we see in the index.

So, this seems a lot more lopsided than Barra made it seem. Part of it is that Gibson had nearly a season’s worth of starts. Marichal petered out early and Barra wanted to look at them both when they were at their best. So, looking at career value is a bit of a stacked deck as they are concerned. Barra wanted to know how good they were when they were in their prime.

However, to understand how off Barra was, we have to understand why. It comes to down to pure ability to missed bats. We will take a look at the overall pitching numbers, but we will take a look at their ten best seasons and see what we see. I imagine we will see a significant difference in wins and winning percentage. First, let’s look at peak value.

So, perhaps there is less than a gap then there was over the course of a full career, but when we look at the pitching numbers, you will see exactly why people would seem to believe that Marichal was better. It goes back to the old-school belief that big game pitchers know how to win and knowing how to win is how we should judge a pitcher.

Gibson was famously 22-9 in 1968 with a 1.12 ERA. How in the hell did he lose nine games? That season is a perfect example of how Gibson was somehow underrated by those traditional guys. Now, Barra used some slight of hand to demonstrate that Gibson pitched on better teams because they had better records. Why were they better? That is the question.

Simply put, we have better information now than we did before, however Lee Sinins made the concept of neutral wins and losses popular. Gibson didn’t have bad luck per se, but you can see his teams really didn’t help him that much. The flip side is that the Giants obviously gave Marichal some pretty good cover. If we converted these totals to neutral wins then Gibson would still have 250 and Marichal would likely have in the neighborhood of twenty fewer wins. That would also mean 20 more losses.

Of course, Barra was not arguing about full career value because he did acknowledge that Marichal had injury trouble late in his career that ended up affecting his overall effectiveness. Their best ten year stretches actually almost completely overlapped. Marichal’s ten-year stretch went from 1962 to 1971 while Gibson went from 1963 to 1972. We could substitute a season here or there, but they were pretty consistent during their ten-year peak.

Maybe Marichal is not the one that petered out. The gap is even bigger here and we see the Cardinals were not any more helpful during this stretch than they were over the course of his full career. Keep in mind that they won three pennants during those ten seasons while the Giants had more limited exposure. Thus, you have the illusion that Gibson played for better teams and therefore must have gotten more support.

Of course, playoff performance is yet another category on top of the index. It doesn’t carry the same weight statistically as the index because of the sheer volume of numbers, but as many commenters have pointed out, reputation and fame plays a big role in these debates. We just need to check if our memories are valid.

Gibson’s 1968 numbers are somehow a perfect ending to that season. He lost two games in the 1968 World Series despite pitching brilliantly. Otherwise, his record was impeccable, and he deservedly is called one of the best postseason performers of all-time. Marichal has impressive rate statistics but he never really got off the ground. He was hit by a pitch that took him out of one of the two games he pitched in.

I’m not dinging Marichal for bad luck. Yet, you can’t ignore the added benefit that Gibson’s record gives his legacy. He’s better than what his record suggests both in the regular season and the postseason. This is in spite of the fact that the Cardinals were a pretty good team. Sometimes things happen that way.

I love BWAR points for position players and pitchers because it provides a simple number that usually reflects what we see with the more advanced numbers. Gibson was just more dominant than Marichal. Marichal certainly was very good and deserves his spot in Cooperstown, but to suggest he was just as good as Gibson is simply not true. Of course, we have better information than we did in 2002, so Barra can be forgiven for coming up with the conclusion that he did. 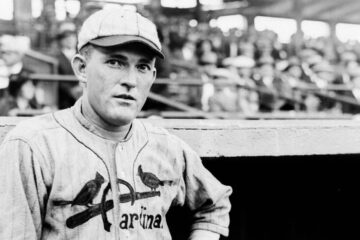