As we move to the second list of Veterans Committee pitchers we suddenly run head long into the distinction that was made in the book The Hall of Fame Index Part II. Asking whether any of these individual pitchers are legitimate Hall of Famers is the wrong question. The question is whether they were the best pitcher not in the Hall of Fame. In every case the answer to the second question would be no.

Just like with the first group, we notice some commonalities that can help explain why the Veterans Committee came away impressed. Primarily, their overreliance on wins and winning percentage can be seen clearly. This will particularly be seen when we get to the pitching statistics. However, playoff performance also plays an important role.

As you know, we will have three parts in this series, so none of these pitchers is the least qualified pitcher in the Hall of Fame. They all have points in their favor, but as we will see those points are somewhat dubious when held up against scrutiny. In some cases, there deserves to be considerable scrutiny as we will soon see.

One name here sticks out like a sore thumb. Morris is the only pitcher here to pitch past World War II. In fact, he’s the only pitcher really to do his best damage after the 1920s. However, that might not be the biggest takeaway when you look at the group collectively. I’ve mentioned the book  Baseball’s Dynasties: The Greatest Teams of All-time before. Three of these pitchers figured prominently in this book on some of the best teams in baseball history.

You get the age old question: were those teams great because of those players or were those players really good because they were on those teams? The answer often depends on the player and how integral they were to the success of the team. The 1927 Yankees wouldn’t have been who they were without Ruth and Gehrig. I’m just not so sure how Waite Hoyt and Herb Pennock contributed to that greatness.

Still, the goal of the index is to search for gaps. I’d never make any hard and fast decisions based on a few wins here and few wins there. However, when we see an overall difference of 50 wins we begin to take notice. That’s when we have to start asking some big questions and the biggest question probably will be attached to Morris since he was the most recent addition.

The top three pitchers probably don’t have enough separating them from the first group to really question their enshrinement. Bender played a prominent role on Connie Mack’s first dynasty in Philadelphia. Again, it is fair to question how responsible he was for that. We’ve addressed Pennock and Hoyt, so this leaves Morris. Since we have all kinds of advanced numbers it is important that we analyze why those were overlooked.

There is a great myth that great pitchers know how to win. They somehow instinctively pitch to the score. Of course, if we stop to think about it we realize that is a pant load. What isn’t a pant load is the question of playoff performance. Those aren’t included in the index, so it is a deadly serious consideration.

Let’s do a quick comparison of the first group of pitchers we profiled on Monday and the pitchers from today. We will take the aggregate for each of the numbers above to see what really motivates the Veterans Committee and what really should motivate the committee. The numbers will probably surprise you.

We can clearly see that the first group and second group won games at almost the same clip and the second group was superior in the number of games won. However, that is where the similarities stop. The first group was much more proficient at preventing runs and also had superior neutral records after run support and fielding support were removed. So, in essence we are electing players based on geography and not on actual ability.

Morris is not the most egregious offender. That honor seems to go to Chief Bender who somehow managed to have over a ten percent difference between winning percentage and neutral winning percentage. That’s outrageous. However, the context of Morris’ totals cannot be overstated. If he had won games at a .517 clip he would have ended up with 226 neutral wins. It’s hard to imagine him getting much support with that sum considering all of his other numbers.

Playoff numbers bring two very compelling questions when it comes to Hall of Fame analysis. First, since they aren’t included in the index, how much weight should they be given even when we are looking at face value? We know sabermetric numbers are based at least partially on leverage and there are no higher leveraged situations than the playoffs. So, would we will count Morris’s numbers as worth one full season? If that’s the case then would that be enough on its own to tip the scales?

Secondly, what do these numbers really mean in a more qualitative sense? Morris’s overall playoff numbers mirror his career ones. The winning percentage is close and the 3.80 ERA is close to his career 3.90 mark. Yet, we all remember Game 7 of the 1991 World Series where he pitched ten shutout innings. Does that single performance outweigh everything else he did in the playoffs?

The others will have similar questions, but Bender and Hoyt have an added case in that all of those innings came in the World Series. There were no league championship series or divisional series back then. Considering the success of those teams you could go either way. You claim it is as evidence that they played a more integral part in their team’s success than originally thought. You could also point to the coattails theory as well.

BWAR Cy Youngs are a significant honor. It shows that those pitchers could have a credible argument that they were the best pitcher in the league in at least one season. Pitchers like Faber and McGinnity can argue that they were on multiple occasions. Bret Saberhagen and Roger Clemens are the only two eligible pitchers that have won multiple honors that have not been elected into the Hall of Fame.

Not winning one doesn’t mean you aren’t a good candidate, but we want to see some top five finishes in its place. Both Bender and Hoyt suffer here. In an eight team league, it isn’t that impressive to finish in the top ten. In this case, Morris’ finishes are more understandable. At least he played in 13 and 14 team leagues throughout most of his career. So, all in all, I wouldn’t say Morris’ selection was an outrageous mistake, but considering some of the other pitchers that are not yet in it is a bit glaring. 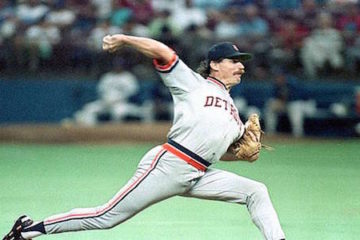