Robert Griffin III Shuts It Down

I supposed I’m not actually breaking much new here, you know, because you don’t all live in deep, dark, internet-free holes that prevented you from hearing about this yesterday. As complex as the web of quotes, media spin, and conjecture around this is, the fantasy impact is pretty simple. RGIII wasn’t a good quarterback this year; it’s quite clear that neither Griffin, nor is coach, is fully confident in his surgically repaired knee. Kirk Cousins is fine, but in an offense built for a dual-threat QB, he’s not much of a fantasy commodity. If you’ve been successful enough to make it this far in your league’s playoffs, you likely don’t have much use for him.

All jokes aside, it’s hard to make a rational argument against Marc Trestman’s decision to re-insert Cutler into his starting lineup. McCown has done a bang-up job as a backup, but let’s not forget putting up big offensive numbers is a two way street – and the Dallas Cowboys defense is a damn friendly traffic cop. Cutler is generally a better fantasy quarterback than he gets credit for, but still wouldn’t start him in a playoff matchup; the weather/Joe Haden factor is too much to overcome this week.

Herein lies the issue with holding the fantasy playoffs during a part of the season that is meaningless for nearly half of the real-life teams involved. Adrian Peterson missed practice Wednesday after injuring his foot against Baltimore on Sunday. The Vikings have nothing to gain by winning another game the rest of the season; I’d be floored if Peterson played this week. Oh, and good job handcuffing him with Toby Gerhart, he’s out for the rest of the season. And no, Matt Asiata is not a viable option.

The Philadelphia Eagles ($3,600) get to face a Minnesota offense led by a third-string running back and Matt Cassel, who would probably be fifth or sixth on the depth chart for an actual professional football team. I honestly can’t possibly imagine a more favorable matchup.

Though the team results have been inconsistent, the Detroit Lions ($3,100) have steadily improved on defense, last week’s snow-capped disaster notwithstanding. More importantly, are we sure that the Baltimore offense is any good? Prior to last week’s fourth quarter outburst against Minnesota, the Ravens hadn’t scored more than 22 points since the first week of October; in the last month, they’ve surrendered more fantasy points to opposing defenses than purported offensive tire fires like Oakland, Houston, and Tampa Bay. I hope Joe Flacco snuggles his contract every night when he goes to sleep.

Though they were absolutely shredded by Peyton Manning last week, the Tennessee Titans ($2,700) actually have a pretty solid defense, especially against the pass. Wouldn’t you know it, they’re playing the second-most pick-prone quarterback in football this week, Carson Palmer! Something tells me a few Tennessee defensive backs will have a few chances to show what they can do with the ball in their hands…

Coming into the season, you could’ve made an argument that this week’s game between the Atlanta Falcons ($2,800) and the Washington Professional Football Team ($2,000) should have been slated for a primetime slot. Oh well, earning PFOTW honors will have to serve as a consolation prize. Both teams have been knee-capped by injuries and neither has ever been able to get into an offensive groove this season. The turnover potential is much higher for the Atlanta defense, but I’d be fine taking a cheap flier on Washington as well. I don’t expect a lot of points in this one. 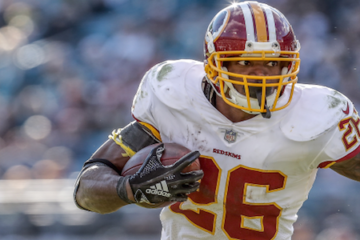