There comes a time when you just run out of words to say about the excellence of a player when they’re playing like Stefon Diggs has been the last four games. In Diggs’ case, the last four games have been the first four games for his career. Diggs now has 25 catches for 419 yards and two touchdowns over four games so far this season, which translates to 100 catches for 1,676 yards and eight touchdowns over a 16 game season. It’s highly unlikely that he would have achieved those numbers if he would have played since the first game of the season, but it is still an encouraging stat to see.

The most impressive stat from Diggs’ six-catch performance that led to 95 yards and his second touchdown of the season in Week 8 is that Diggs was targeted a whopping 12 times throughout the game. To put that into perspective, Teddy Bridgewater only threw the ball 25 times, meaning the rest of the Vikings receivers combined for just 13 targets. ridgewater was 6/12 passing for 95 yards when targeting Diggs and 11/13 for 92 yards when targeting everyone else. While Bridgewater was better from a completion standpoint when looking at other guys, he will continue to throw to Diggs as their primary receiving weapon from here on out. Diggs is a must start in all formats and a must start in Draftkings play until his price becomes higher than the $4,800 it was this past week.

The Chargers and Ravens battled in Baltimore on Sunday afternoon in a back and forth matchup that mainly was due to the passing attacks of both teams. Gordon came into this game receiving just 14 carries in his previous two games combined, and he sat on the bench for the entire first half last week against the Raiders because of his issue fumbling the football the week prior against the Packers.

Danny Woodhead and Phillip Rivers have the best connection, by far, of any running back in the Chargers backfield, with 39 catches to his name compared to 18 and 13 for Gordon and Oliver, respectively. However, it was Gordon that led the way with a career-high 18 carries. He was only able to turn those 18 carries into 54 yards, but it shows the leash and the investment this team has made in their 2015 first round pick. Gordon is running behind a terrible offensive line in San Diego, so these mediocre numbers should continue. Gordon can be limited to a FLEX play at best when you have no better options or when other guys are on a bye week.

Like Stefon Diggs, there are just no words that haven’t been said about how incredible Todd Gurley has been since returning from ACL surgery. He is not only destroying the rest of the rookie running backs in every category, but he is leading the entire NFL in rushing, despite just six carries in the first three games combined. Gurley is averaging 115 yards per game and 6.1 yards per carry. He has four straight games as the starting running back running for more than 100 yards. In fact, the 128 yards rushing against the Browns in week seven (third start) was the lowest total so far this season in his four games. This guy has done absolutely everything for the Rams, and it is scary to think what he could do if he had a passing attack that would take some of the pressure off of him. He is a top five running back the rest of the season and could very well be the number one pick in 2016.

It was a tough week on Revis island for the rookie out of Alabama, as he finished with just five catches for 46 yards. One of his catches came off of a deflected pass that was not intended for him. Meanwhile, Michael Crabtree has developed into a great second option for Derek Carr, which is vital to the success of Cooper moving forward to take some pressure off of him. Cooper was second on the team in targets with nine (Crabtree – 12), and will be able to put up solid numbers if he continues to see those kind of targets each and every week. It’s tough for any receiver to go up against Darrelle Revis, much less a rookie, so we won’t hold this one against him. Cooper will likely see the opposing defenses top corner every game, however, which will make him an up and down play for the rest of the season. He has a few favorable matchups in a row, however, and should continue to start in all formats.

Week eight against the Atlanta Falcons was the first game of the year where Winston failed to throw for more than 200 yards, but he avoided turning the ball over for the third straight game. He now has not turned the ball over since throwing four interceptions in week four against the Panthers, and the Bucs have won two of those three games and could have easily won all three if it weren’t for the largest comeback in Redskins history in week seven.

The recipe for success has been simple in this current stretch of mistake free play for Winston, and that is to let Doug Martin handle the load to take off as much pressure as possible for the rookie QB. Winston has shown flashes of brilliance in recent weeks, and it is going to help him in his development to let him ease his way in to being the guy they can lean on. He did, however, throw his 10th touchdown of the year and added his second rushing touchdown of the season as well, finishing with a very solid line of 177 yards and two total touchdowns. Winston has been doing less through the air in each of the three wins for the Buccaneers, which should be the theme moving forward. He has been a solid fantasy option as a fill-in option, as he has thrown at least one touchdown in every game so far this season. 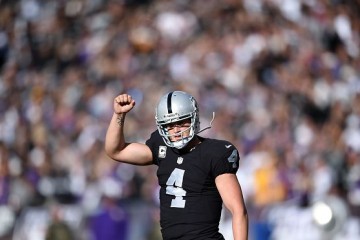