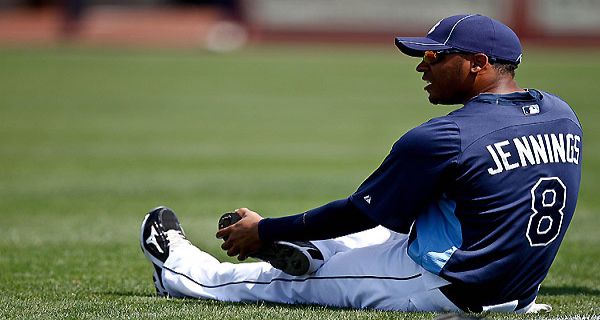 At this point, it’s safe to say we can do a decent job of evaluating our team’s strengths and weaknesses. The general rule-of-thumb encourages owners not to panic too early with regards to our stars, but now could be a good opportunity to try and acquire some runs as a throw-in via trade (to an owner that IS panicking) or simply from the waiver wire in deeper leagues.

Here is a trade target and a few run scoring options owned in 40% or less fantasy leagues.

All ownership data based on Yahoo! leagues.

Desmond Jennings | Rays | 92% – The real and fake baseball community has been waiting patiently for the imminent breakout of Rays’ leadoff hitter, Desmond Jennings. But as he approaches his 1,000th career plate appearance in the majors, owners are wondering if that time is ever going to come. Subsequently, owners are growing incredibly impatient with DJ’s inability to become the player fantasy analysts insisted he could be and may be willing to part with the outfielder at a discounted rate.

Let’s look back at an excerpt on Jennings from our 2013 Fantasy Baseball Draft Kit written by Josh Kay:

“While it’s too early to call Jennings a bust, his stock is quickly falling in fantasy leagues. Once heralded as a top prospect, the young speedster has had issues with his walk and strikeout rates as he’s ascended the organizational ladder. Since a 0.92 BB/K ratio (anything close to 1.00 is considered elite) in 2009 for the Rays (AA) affiliate, Jennings has seen that BB/K ratio shrink faster and faster. After a 0.38 performance last year, things are not so forward-looking for Jennings to contribute with a batting average of at least .275 with average to above average pop. He’s a pure speed threat and should rack up more SB if he can improve his OBP numbers.”

Ask the Jennings owner in your league what it would take to pry him away. Tell him the batting average stinks.

Daniel Nava | Red Sox | 38% – Nava has scored 15 runs in just 21 games, putting him on pace for 115 runs over the course of a full season. In addition to the runs that you’re here looking for, Nava will provide a healthy balance in three of the other four traditional categories — for now — with the exception of stolen bases. His current .340 average on balls in play, versus a career .313 BABIP, should cause his batting average to dip a bit, but Nava should be a decent source of runs from here on out.

Gerrardo Parra | Diamondbacks | 33% – 18 runs in 26 games for Parra thus far in ‘13. But the questions going forward is: how many plate appearances will he earn upon the return of both  Jason Kubel and Adam Eaton? Ride him in rotisserie leagues while you can.

Jon Jay | Cardinals | 15% – Jay is another outfielder who’s currently struggling at the plate (.221 BA), but when he gets on base, he tends to score runs. Deeper mixed leagues need only apply.

David DeJesus | Cubs | 5%  and Chris Getz | Royals | 5% – Both have scored 14 runs despite DeJesus getting on base more than Getz. These guys are serviceable in the deepest of leagues and will contribute to more than just the runs category.