The Baltimore Orioles finally did something this offseason when they signed 30 year old starting pitcher Ubaldo Jimenez to a four year $50M deal this week. Jimenez moves to the top of the Orioles’ rotation, but did the Orioles make the right move in signing Jimenez? And what should you know about Ubaldo for fantasy baseball purposes this year?

Impact on the Orioles

Jimenez’s signing pushes everyone in the rotation back one spot and that’s probably a good thing for the development of the Orioles’ younger arms. According to MLBDepthCharts, the O’s rotation is predicted to be:

Jimenez’s acquisition ends any chance that Kevin Gausman makes the opening day rotation. I think this is a good thing for Gausman’s overall development as he should get a chance to work on his secondary pitches to hopefully overcome the issues he had in his major league debut.

It also puts new signee Suk-min Yoo in the bullpen (though I believe he’ll be given a chance to compete with Bud Norris and Miguel Gonzalez). It also allows the O’s to stash 24 year old lefty T.J. McFarland and former prospect Zach Britton at AAA. The move strengthens the O’s rotation depth, and you can never have enough starting pitchers.

It also gives the O’s less of a reason to push youngster Eduardo Rodriguez or rehabbing Dylan Bundy into their rotation to plug a hole. Again, a positive for the development staff.

To describe Jimenez’s delivery as complicated does a disservice to the definition of the word of complicated. I’m not a scout of course, but that is the book on Jimenez. Here are a couple of pitches to show what it all looks like:

It’s all arms and legs and deception and falling and moving. There are a lot of things going on and the story on Jimenez is that if his mechanics are right, he is almost unhittable. As the legend of Ubaldo goes, he had perfect mechanics in the first half of 2010.

Then, he lost it…completely…until he finally rediscovered it in the second half of 2013. He was led through the valley of darkness by Indians’ pitching coach Mickey Callaway (who is also credited with helping Scott Kazmir regain relevance). Take a look at the first half of 2010, the second half of 2013 and his career numbers (all stats courtesy of Baseball Reference):

The Orioles don’t have Mickey Callaway on staff, so there will be a lot of pressure on pitching coach Dave Wallace to keep Jimenez’s mechanics in check. Wallace’s reputation is as a great teacher of young pitchers so we’ll see what he can do with the veteran Jimenez.

The full details on his contract aren’t known. I’ve seen reports that have the total value of the full deal between $48M and $50M. There have also been some reports of deferred dollars in the deal, which would make the full package a bit more palatable.

During this offseason, here are the deals we’ve seen for starting pitching: 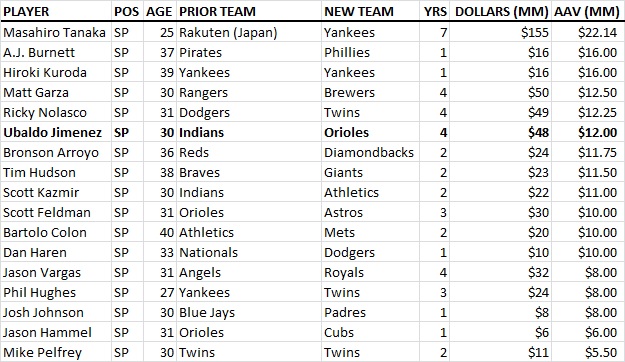 Ubaldo seems to fit in quite well – looks like the O’s didn’t overpay, and if there are significant dollars deferred, they may end up with a bargain if Jimenez can maintain his mechanics. As an aside, that Bronson Arroyo deal certainly doesn’t look great.

Not to be overlooked, the Orioles also lose the 17th overall pick in the 2014 draft and associated draft dollars (the value for 2013 was $2.164M). For a team that doesn’t seem to have enough to win now and has been pretty solid in the early rounds of the draft recently, this is certainly a hit to the future. A look at those players picked 17th overall – everyone from Roy Halladay and Cole Hamels to Rick Asadoorian and John Curtice.

After all of that, what should we expect from Jimenez this year from a fantasy perspective? Jimenez is a groundball pitcher though he doesn’t have nearly as big a spread now as he did in his early years. 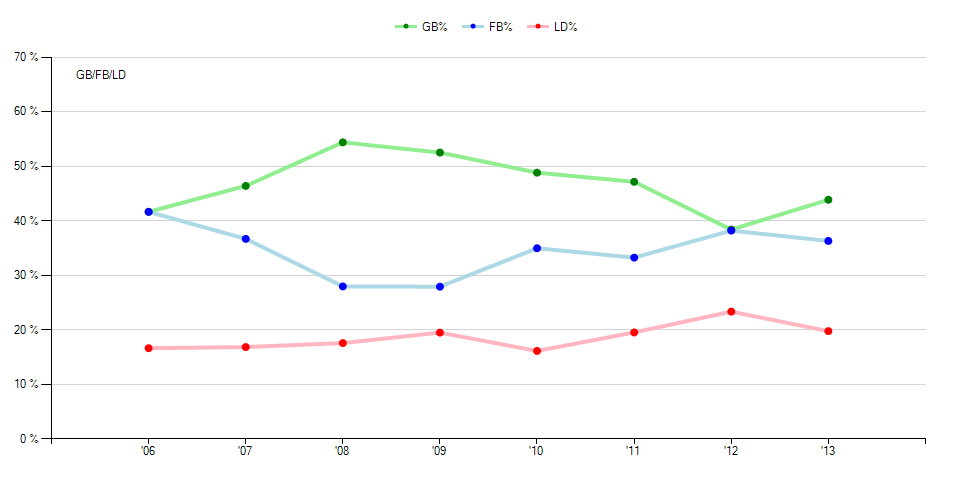 Luckily for Jimenez, he’ll have a solid defensive left side of the infield in Manny Machado (when he returns) and J.J. Hardy. Machado was fourth in ALL OF BASEBALL last year in defensive runs saved with 35. And Hardy was fourth among all qualifying shortstops with eight. Chris Davis however, wasn’t a great help in the field so he could have an effect.