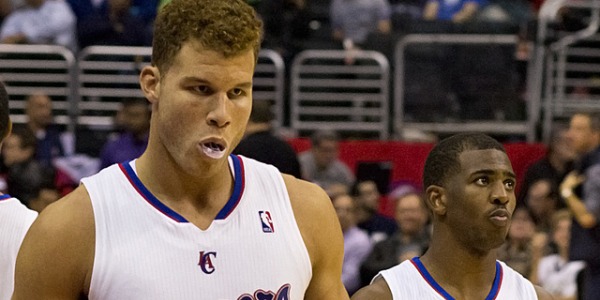 The Pacific Division has two top dogs in the Clippers and Warriors, but make no mistake about it, there competition is on the rise.  The Suns are positioning themselves to have a chance to be excellent in 2-3 seasons, the Kings have new ownership and are looking to reignite a fan base, and the Lakers are the Lakers.  How long are they supposed to stay down?

Team Overview: Despite the loss of Eric Bledsoe, the Clippers managed to get better and deeper in the offseason.  J.J. Redick gives them a shooter and Dudley should be an improvement over the aging Butler.  Collison is a nice get for a backup point, while Jamison and Mullens give some needed size off the bench that can also stretch the floor.  The most important thing of course is that CP3 has decided to stick around.

The Clippers finally found themselves an actual head coach in Doc Rivers, and that should only help their championship aspirations.  Still, you have to wonder if even Rivers can get this team over the hump.  Blake Griffin has to take another step towards the elite.  DeAndre Jordan needs to finally turn a corner, especially as a defensive anchor, and the team has to get tougher.  CP3 is here and the window is now.  The added scoring and extra depth can only help an already great team.

Pressing Questions:  Does this team have enough to get it done, especially on the defensive end?  Will Paul’s knees hold up for another year?  Will Griffin become a more fantasy friendly player and bounce back from a mediocre fantasy season?  Doc Rivers has some talent to work with, but this team lacks toughness.  Will he be able to instill that tough mentality the Celtics had for so many years? As for fantasy, how much will the Clippers increased depth hurt the value of Redick, Crawford, Dudley, and Barnes?  I would say quite a bit, but Redick and Crawford should hold the most value out of the four.  Can Doc get through to Jordan and make him a beast?  As for one of their other big men, the Clippers’ Byron Mullens may find some sneaky value as the season moves along.

Team Overview: The Warriors are another team that got stronger over the offseason.  Iguodala will add some needed defense and will even help make the offense flow.  Tony Douglas is a downgrade at the PG spot, and if they kept Jack, it would have been a huge plus.  Still, Douglas can hit a three and at times can be a decent defender.  They also added some nice front court depth in Speights and O’neal.  They signed Andrew Bogut to an extension last night, so they are officially all in with the big man.

Is it enough?  The West appears to be wide open and the Warriors have enough young players that they have some ceiling to reach.  Even Mark Jackson is relatively new at his job.  Stephen Curry is becoming an absolute beast and just needs to stay healthy.  Clay Thompson and David Lee are both good as second fiddles.  Like the Clippers, you wonder about the defense.  Iggy will help, and a healthy Andrew Bogut should too.  Harrison Barnes did great in the playoffs and can also help defensively.

Pressing Questions: Bogut and Curry must stay healthy.  Sure, the Warriors were a fun team last season, but fun isn’t enough.  They need to stay healthy to reach their ceiling.  They have the ability to put out a decent defensively lineup with Bogut at the 5, while Iggy and Barnes play the 2 and 3 spots.  If they can put all the pieces together and stay healthy, no one should be surprised to see them in the Western Conference Finals.  Curry is one of the best fantasy players around and should be taken within the first five selections, ankle worries and all.  Iggy’s tenure in Denver was considered a minor disappointment, so some may sleep on him come draft day.  Barnes, despite his great postseason, has limited fantasy potential.  He is hurt by limited minutes and right now lacks the ability to fill up multiple categories.  Some may overvalue him on draft day.

Team Overview: Where to begin?  Well, the Dwight Howard debacle is finally over.  And the Lakers are in for a long season.

After the New York Knicks disaster, I am not sure how Mike D’antoni got another head coaching job.  Good for him, but this too will likely be short lived.  Kobe Bryant is still out with his Achilles injury and he seems to be slowing down his rehab.  Not a good sign.  There second go to scorer for now is Nick Young.  Not really what you want.  Mike D’antoni refuses to play a Kaman at center with Pau Gasol at the PF spot, so he can play Shawne Williams as a stretch four.  Hmm.  Unfortunately for Gasol and Steve Nash, they are stuck with trying to make the lack of talent work.

Pressing Questions: Are the Lakers really relying on Nick Young?  Yes.  And while that may be a terrible thing for the team, Young could still be of some use as a late pick for your fantasy team.  Don’t expect huge miracles, however.  Pau Gasol has to stay healthy and if he does, he should be very productive.  The real question is how much does Steve Nash have left?  He is dropping fast in draft.  He has fallen so much, that he should provide some nice value.  He needs to stay healthy.

Team Overview: The most important thing to know about the Sacramento Kings offseason is that they got a new ownership group.  They got rid of Head Coach Keith Smart and brought in a new general manager.  So in a sense, the offseason was a win.  They lost Tyreke Evans, but paying him a large salary didn’t make much sense.  They did extend DeMarcus Cousins, which you can also say may not make much sense from a real life basketball standpoint.  Carl Landry is likely to miss the whole season with an injury and Greivis Vasquez is battling it out with Isaiah Thomas for starting point guard duties.  Unfortunately for Ray McCallum, he doesn’t really have a chance to get minutes.

The Kings don’t have much talent, but they do have a glut at the guard positions.  Thomas and Vasquez are battling for point guard control and it will likely end up crushing what could have been some fantasy value goodness.  Ben McLemore, Marcus Thornton, and Jimmer Fredette will be sharing the minutes at the two.  I expect Fredette will soon be left out of the equation.  DeMarcus Cousins will be handling the minutes at center, while Jason Thompson and Patrick Patterson fight for minutes at the power forward spot.  John Salmons somehow, for the second year in a row, is in line for consistent minutes.  I am not sure why, but it is happening again.

Pressing Questions: Will DeMarcus Cousins live up to his new big contract?  The numbers will be there, and he should have a strong, if not a true breakout fantasy season, but if I was running an NBA team, I wouldn’t give him that contract.  Who will win the point guard battle and will it even matter?  I think Thomas is a stronger player, but I am not the one making this decision.  I have a feeling no matter how it goes; the minutes will be shared, putting a nice uninspiring capp on their fantasy value.  The next question is who to own, Patrick Patterson or John Thompson.  If I had to draft one of these players, it would be Patterson.  He has some ability to hit a three and seems to be doing enough in the preseason to win the job.  Out of the shooting guard spot, I think Thornton will end up seeing more minutes.  McLemore is likely to be inconsistent and I could see Thornton eventually squeezing out 25-28 minutes a game.  He can drain some threes and has the ability to put up points in bunches, so Thornton is probably worth a late grab in drafts.  Will John Salmons ever stop getting minutes?  No.  Should I draft him in shallow leagues?  I can’t see a scenario where you would have to consider him as an option.

Team Overview: New GM Ryan McDonough has the wheels in motion.  There is no doubt that the Suns will be terrible this season.  They may be fun, but terrible.  But bright days are ahead.  The Suns acquired a potential beast in Eric Bledsoe, drafted Alex Len, and acquired an interesting big in Miles Plumlee.  With the exception of Bledsoe, the most important thing for the Suns is the potential to have four first-round picks next season’s draft.  If done right, this team can be very dangerous in 2-3 seasons.

Eric Bledsoe is expected to play alongside Goran Dragic, and while that will no doubt be exciting, the team is expected to be one of the worse in the league.  Emeka Okafor is most likely out for the year, so Alex Len gets his chance to play big minutes with the Gortat trade that was executed yesterday evening.  And the trade opens up some possibilities for other prospects of interest.  To read more about the trade and what it does for the Suns and your fantasy team, click here.

Pressing Questions: Will Eric Bledsoe become the Suns next great point guard?  Goran Dragic’s time in Phoenix is counting down even if the two manage to play well together.  Whether or not Bledsoe can lead a team as a point guard remains to be seen (I think he can), but what is known right now is that he will undoubtedly fill the stat sheet for your fantasy teams.  Can Alex Len stay healthy?  He is coming back from ankle surgeries and you wonder if it will be a chronic issue.  Can Channing Frye come back from his heart ailment and be an effective player again?  Can Markieff Morris take another step forward?  Outside of Len, Bledsoe, and Dragic, they may be the most interesting players from a fantasy standpoint.